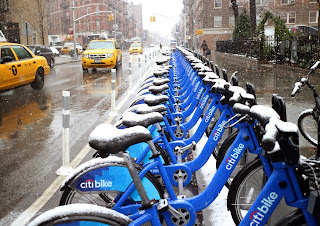 Now some news out of Canada bodes poorly for urban transportation utopians. Public Bike System Co., the company that designed the sturdy bikes and nifty solar-powered docking stations used in New York and more than a dozen other cities around the world, was forced into bankruptcy protection in Montreal, where it also administers the local sharing program. The nonprofit, known as Bixi, has debt of nearly $46 million.

Bixi's financial troubles have persisted for years; Montreal gave it over $100 million bailout in 2011. Part of Bixi's shortfall is a result of New York and Chicago program operators withholding payments of over $5 million because of problems with the software that runs the bike docking stations.

Bixi acts as a supplier to Alta Bicycle Share Inc., which administers New York's Citi Bike and similar programs in Chicago, Boston and elsewhere. Alta said on its website Jan. 20 that its systems "are up and running and ABS will ensure that they continue to operate without interruption."

Citigroup said its program is safe.

"Alta has reassured us that they have appropriate plans in place, and we are confident Citi Bike operations will not be negatively impacted for users," said a bank spokesman.

It's not clear, though, what Bixi's troubles mean for CitiBike's scheduled move into new areas of New York City. Citi Bike is operated by Alta subsidiary NYC Bike Share.

As the weather got colder this winter, more New Yorkers set aside their Citi Bikes. On Jan. 3, the day after a howling overnight snowstorm, the city’s bike share system logged the fewest number of trips for a 24-hour period since launching in May last year, according to data posted on its website.

Riders checked out the blue bicycles a record-low 1,230 times across the city, compared to an average of over 30,000 times per day during the summer.

Snow was not the only cause for the record low reached on Jan. 3. The number of daily bike share rides has declined steadily as average temperatures have dropped. Citi Bike users rode the bikes four times less in January compared to the system’s record month of September.

The seasonal drop is likely to make a financial dent for the Alta Bicycle Share. Bloomberg said in October that Alta was still losing money due to the costs of rolling out the system.

The mayor’s office and NYC Bike Share did not return requests for bike share’s financial data.

It would probably help if someone plowed/shoveled the bike lanes. But that's not likely to happen.
Posted by Queens Crapper at 12:03 AM

I use a bike for my job and I never use those lanes,they have become an extended sidewalk for asshole jaywalkers.

another failure for the funsize mayor's legacy of urban blight

the effort to complicate our lives by taking over public space to try to lower the carbon footprint will be doomed to failure.

it is a bit said, thou, to see the young bike nuts fight for something that benefits developers rather than their community.

Sorry, someone left a comment and while I was fiddling with my phone, I pressed delete instead of publish. Please send it in again. It contained a link to a post about a cop clearing a bike lane in Brooklyn, but that was most likely jus clearing snow so officers could park, not being nice to bikers. The lanes in midtiwn Manhattan are a slushy mess. And yes, this bike parking and bike lanes benefits developers who can market to people naive enough to think they are green and saving the planet.

fwiw crappy, I don't think biking makes me green or means I'm saving the planet. I just don't like getting crammed into a crowded subway where I'm touching about 6 people I don't know. Or looking for parking on both ends of every trip. Or going to the gym. A good bike ride gets me the physical activity I need to keep my head on straight. It's my preferred method for getting around. When biking is inconvenient, I end up going out less and staying in more. It is something I'll keep in mind whenever I'm looking for a place to rent.

And a lot of lanes are definitely a mess after a snow, yes.

Heard that these bikes were made in China using very questionable material.

Maybe you should try getting out more.