Something reeks at Newtown Creek (and it isn't the water)!

Miss Heather has posted some eye-opening screenshots that seem to indicate that the Argentos of Knockdown Center fame have pulled another fast one on communities on both sides of Newtown Creek. How did they accomplish this? Let’s take a trip back in time to 2010…

Back then, it was announced that the City Parks Foundation was looking for participants to attend meetings to help determine how the Newtown Creek Environmental Benefit Project Funds were to be distributed. People from both sides of the Creek were invited to share their wishes, and ultimately a vote was taken to determine the top finalists.

Here is the list that was published after the vote tally: 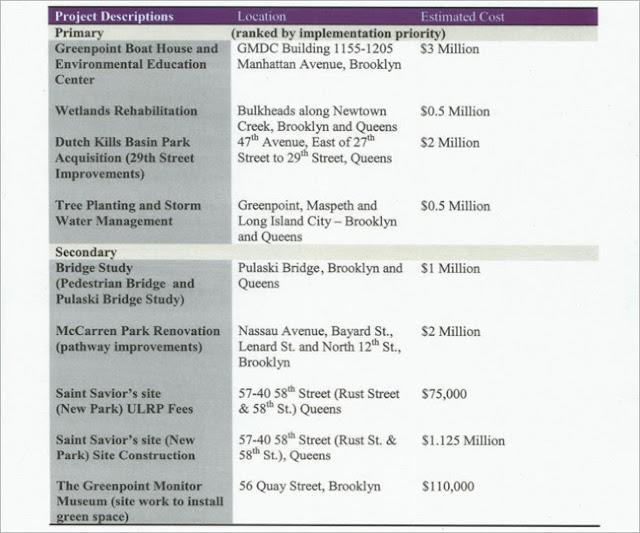 The list was vetted by DEC and the NY Attorney General's office, and the final result was this: 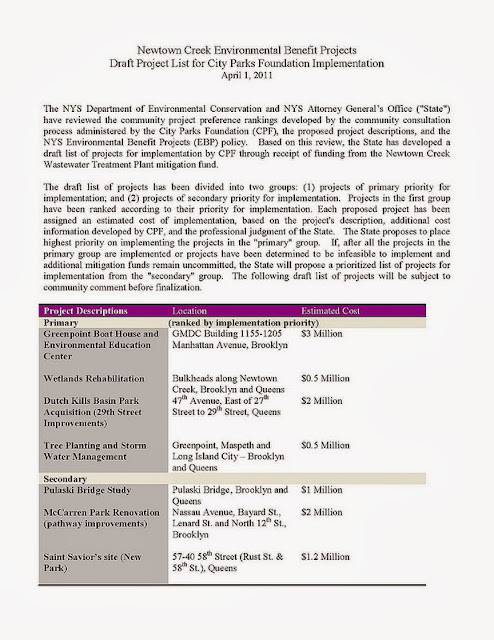 You’ll note that a boathouse was the number one vote-getter. It wasn't. It actually came in third, but for some reason, it was given priority over the other projects ahead of it. It’s also controversial because the Dept of Health actually doesn’t want people paddling around Newtown Creek for health reasons, but the Parks Dept & City Planning convinced them to keep it on the list.

Christine Holowacz is often referred to as a Greenpoint “community activist”. She and "Commodore" Dewey Thompson (that's what he prefers to be called) are allied with GWAPP, which is the group that pushed for the boathouse with a massive get-out-the-vote drive, including relentless blast e-mails. GWAPP members are also members of various other astroturf groups that were created to make it appear that the whole area wants a boathouse.

GWAPP seems to be under the impression that the entire $7M in Creek funds is theirs:


On October 25, 2011, the DEC and CPF submitted a letter [PDF (3.5MB)] approving the funds of the EBP to building out the boathouse, promising up to $7 million for the project. Runner-up projects would receive any leftover funding that was not used in the creation of the boathouse, however those project cannot receive funding until the principal project, the boathouse, is completed.

Unless there were some closed door shenanigans that we are not aware of, that is not the case. They were approved for $3M as noted in the screenshot above.

The address of the boathouse, as per the Newtown Creek website started December 2013, is now 437 McGuinness Blvd, aka 51 Ash Street. The website also says, "Holowacz and Thompson are currently working to finalize a location to house the boathouse and environmental education center."

Finalize a location? Why is that? The project was approved for 1155 Manhattan Avenue, the site of the Greenpoint Manufacturing and Design Center. These are very specific, detailed plans, incorporating the architecture and history of the previously proposed site. How can they just pick up and move to a not-yet-built site? And how is DEC ok with this?

So, what do you get when you pull up the DOB filing for 51 Ash Street? An application to build a 4-story hotel, with a “private club” listed as the "community facility" that allows the owner to build larger than what is normally allowed. The owner? None other than Broadway Stages, co-owned by Gina and Tony Argento! If the "private club" is temporary, then how do they calculate an augmented FAR based on its inclusion?  Could it be the new permanent home of the North Brooklyn Boat Club?

Is the "Greenpoint Waterfront Association for Parks and Planning" actually pushing for a private boathouse? How do so-called environmentalists sleep at night knowing they have sold out their community to people who "lack good character, honesty and integrity" in exchange for a boathouse? The club currently charges $40 for membership per year. How can public funds be released to build a boathouse that is only open to members? Who the hell in Greenpoint, outside of these charlatans, wants to see a boathouse built with environmental settlement money inside a hotel right next to the Pulaski Bridge?

Bottom line: GWAPP is getting the money for their private club, the Argentos are getting an FAR increase to build a bigger hotel, and everyone benefits except the rest of the neighborhood.


AND NOW LET’S GET TO QUEENS.
From City Parks Foundation:

The decision posted in the second photo above states,


“If after all the projects in the primary group are implemented or projects have been determined to be infeasible to implement and additional mitigation funds remain uncommitted, the State will propose a prioritized list of projects for implementation from the secondary group.”

The language is quite clear. If a project isn’t going to happen, then it’s removed from the list and the DEC draws from the second group. It doesn't say that they'll sit and wait for the people behind a project to scramble to find an alternate location. Yet that is exactly what is happening with the Greenpoint Boathouse and the Dutch Kills Basin Park Project.

Wouldn’t it have been smarter to fund them in the order that they were ready to go? For example, planting trees could have been first and would already be making an impact. If the St. Saviour’s ULURP had been funded back in 2011, there might have been a park at that site instead of warehouses. The DEC knocked that relatively inexpensive item off the list completely, yet kept the construction of the park on, which expedited the death of the project.

The Pulaski Bridge Study was ready to go.
Renovation of McCarren Park would be finished by now.
The Greenpoint Monitor Museum was ready to go as well. (Oooooh, but that would have held back the development of the greenway along the coast! We can’t have that. The site of the Monitor Museum has been proposed for public restrooms. Which means the city will eventually own it. Which means eminent domain.)

Instead everyone now must sit by and wait for a hotel to be built next to the Pulaski Bridge. Because the actual polluting of the Creek wasn't enough punishment.

More to come! Stay tuned!
Posted by Queens Crapper at 2:26 AM

Brooklyn politics sounds exactly like Queens politics. The favored groups get the coin and everyone else sits on the sidelines.

I would tend to think that a private club would not pass muster as a community facility. But "clubs" under the zoning code are considered community facilities, even if they are private or charge fees. It's a law that really should be changed, but it won't be, because it helps developers, just as we see here.

I hate phony community activists. I bet they were in favor of the Williamsburg-Greenpoint rezoning as well.

I knew the fix was in with these projects. They had this Holowitch woman speak at the listening sessions and then her project comes in first place? Not surprising.

I don't think this will pass DOB in its current form. They are using mezzanines, including one above the 4th floor. You need to have a floor above in order to build a mezzanine.

Who builds an 11-unit hotel? This is going to be apartments!

These people are not environmental activists. If they were, they would not be advocating recreation in a toxic stew. These people have their own agenda, and it likely involves real estate and their own personal wealth.

Wanna get cash from the DEC and the City? Form a community organization, work in tandem with local politician, find a rotted out old building and then say it'll be a community center with, now here is the ticket, a ENVIRONMENTAL EDUCATIONAL CENTER.

You know, it's too bad the newspapers in this town don't pay for serious journalism like this...

Sounds like Thompson works for that august law firm Dewey, Cheatham and Howe.

If you haven't been anointed by the mob, er, coterie that is Rich Mazur, Jeff Mann, Steve Hindy, Norm Brodsky, or the Argentos (or the elected officials that are mesmerized by their spell) you aren't getting in. Ever.

Why does it that Brooklyn people have their shit together and in Queens we end up talking to drones that whine, colleagues that are ready to cut a deal with the man (which generally means stabbing you in the back) or activists with the attention span of a mayfly.

"Commodore" What a bunch of F- idiots these yahoo's deserve to be poisoned in that water.
I wish they would all go back home west of the Hudson river (or jump in)

The Argentos own half of Greenpoint. They do anything they want. They have bought up every other commercial space to build more and more stages with no consideration to the neighborhood. The traffic with all the trucks is now clogged with trucks who idle all day and spewing more smoke into the already poisoned air. The parking is impossible, filled with workers at the TV and Film productions. I had to move from the neighborhood because I was so mad every time I came home and had to drive for a half hour to find a spot.
I am all in favor of job creating but the suspect, backdoor growth of the Broadway Stages empire is maddening. I am glad people are starting to realize this. Thanks to all of you reporting on this