Why does the Queens Library director make more money than the mayor? 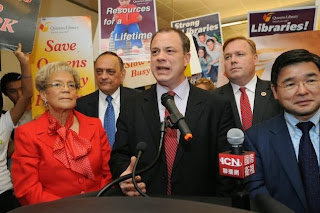 For a classic study of the “Tale of Two Cities,” Mayor de Blasio should visit the Queens Central Library.

Patrons of that dilapidated two-story building on Merrick Blvd. in Jamaica have faced years of unending construction and diminished services.

But that didn’t stop library President Thomas Galante from spending $140,000 last year to renovate his offices on the building’s second floor. Galante managed this after eliminating nearly 130 library jobs through layoffs and attrition over the past five years.

We paid a visit last week to tour the Central Library renovations, which include:

- A 250-square-foot rooftop deck adjacent to Galante’s office for use as his private smoking area. Built with teak tile, furnished with wrought-iron furniture, and surrounded by two dozen evergreens that shield it from onlookers, the deck’s tab alone was more than $27,000.

- A paint job for his existing personal bathroom and shower.

All this came courtesy of you, the taxpayer.

What a creep! He even makes more than a doctor and President of the United States. And owns a house in Wilton? One of the wealthiest parts of CT. What gives ?
Throw the book at him. Pun intended.

Never liked or trusted this man. A snob and a half.

cancer cannot wait,this scumbag has got to be investigated,spending taxpayer dollars like scarface.and he does this in a place frequented by children.

I seen that library,and you would think that they were building a theme park.does this guy lights his cigars with the collections of hemingway?

to think that lots of other queens branches are closed on saturday because of this selfish prick.

We all knew that the little dictator's regime was totally corrupt!

Who is John Liu?

If something involves some knucklehead behavior like a pistol shooting, stabbing, purse snatching, assault, you can expect a person of color, property owner does not take care of their house, has garbage all over, cement covering all the green, expect a third-world immigrant, especially Pakistani, but mass shootings with an assault rifle or some greedy money stealing screw the economy over, always expect a WHITE MAN.

Former Councilman Leroy Comrie (no QB Deputy President) provided millions of dollars in funding to this location. So how much of this money went to Galante’s over bloated salary and fancy office digs?

Next time you see Tom Galante at a ribbon cutting with local electeds, ask him about his salary.

Better yet, go to your local library branch and start a petition.

An outrage! An insult to Queens taxpayers!
And our libraries are the crappiest in the country.
I wonder why.

The Library Board of Directors have marched through Queens destroying branch after branch armed with a bottomless capital budget while services to the borough remain behind that of the other library systems in Brooklyn and New York.

Merge the library systems together!

Look into the non-profits the that the Library Board of Directors themselves serve! You might find some surprises.

They're a private corporation, not a city agency - they just get most of their funds from the city, as well as some from state and some from federal. Years ago, when there was the scandal about the slush fund from overdue fines, city comptroller Hevesi had a very tough time trying to get the Queens Library to open its books.

BTW, here is the response from the Library's public relations people trying to justify what was described in yesterday's article. Gee, you'd think that no one would be going to the Library if not for Tom Galante. He must walk on water.

I hope that Tom doesn't use his office computer to update his Match.com profile - maybe he does that while sitting out on his private smoking deck.

The once great reference library there has been discarding all books over 20 years old as fast as it can. Queens Library is in a death spiral of irrelevance to literacy and knowledge.

It's a hangout decorated by a few PC's, DVD's, and books.


Who are the Board Members?

Who is the President?

How long do they serve?

How often do they meet?

I'm planning on writing a letter to Scott Stringer, the new Comptroller about this. This is ludicrous. I don't know how much he can help given that they are a private non for profit org but if people create enough noise and it becomes bad publicity, maybe it'll create some change.

That list of Trustees is from a few years ago - Joel Miele has since died - but I haven't seen an updated list.

Look up everything salary here.
This will make you sick.
A web site called See Through NY.

Is it possible for Wise Latina Julissa Ferreras, the Queens Democrat who was named Wednesday as chairwoman of Council’s Finance Committee, to authorize an investigation of this?

It's funny to me that probably half the readers of this blog would whine about my teacher's pension from NYC.Focus your energy on idiotic spending such as this. Big Hairy Balls, USAF Viet Nam Vet. Math teacher 31 years NYC Public Schools! Long live Queens Crapper! Long live Israel! Death to the Palestinians!

In today's Daily News, Not-so-Terrific Tom Galante says that his salary is "average" for a non-profit of that size, and blames the staff union for trying to make him look bad.

I guess it pays to know Helen Marshall.

Take a cut Tom! It's the right thing to do considering the mess our Queens libraries are in.

Jimmy Van Bramer, chair of the City Council's Committee on Cultural Affairs and Libraries, has called for an oversight hearing on the Queens Library.

Because Queens Library is essentially a chain of day care centers.

After seeing these names, I can now understand the Queens Library motto:

Criminal. See Sociology section... if your library has one.

we seem to have the whos-who of the development-social elite of the borough here,

like the rest of the borough, its run by a self appointed 'elite' of second stringers.

i glanced through the minutes of some library meeting that went to 60 pages of which 40 pages seemed to deal with development issues.

I do not understand why the library has to be a semi-private group that has access to millions in public money.

This program should be run by the city where we can have its records in the open, a diverse group of directors (including those drawn from the arts and academia) and a balance between development and services.

Someone should compare services among the different library progams in the city and spending on operations vs capital.

Finally, the potential links between the board and the real estate development industry should be made public.

They think that throwing Galante under the bus will solve things.

He is a creature of the swamp - a product of his environment.

Drain the swamp - the board needs housecleaning big time!

I am a Queens official and I can do whatever I damn please. To hell with the Public.

Break out the broom!

The Flushing main libray does not delete cookies, so you can log into someone else's account if they did not log off. The reason for this is the computer staff is all PLA with spyware to monitor dissidents and steal trade secrets. Do not use your ban accounts there.

Electeds come and go. So do voetrs. But bullycraps are forever!

Under previous Queens Library Directors, Galante was the Finance Director. When the last one (Gary Strong) left, Galante was made Interim Director and told to get a Master's degree in Library Science so that he could get the job permanently - which he did. Obviously the Board wanted him - he must know all of the Queens Library's financial secrets.

BTW, the controversy about the Queens Library's slush fund from overdue fines was detailed in a chapter in Secret Police: Inside the New York City Department of Investigation, by Peter Benjaminson.

Not only does this group jump the line (like they do with schools etc - thanks to QCC not fighting for older communities) but its being built right on the waterfront - a great place for books and an electronics. After the storm they decided to built if a FOOT HIGHER!

That useless gimmick of course added more million$ but the Queens$ Library Board of Developer$ don't seem to care.

Please come to the rectangular can of crap that is in front of the Hurricane Sandy Peninsula Library in Rockaway Beach at Beach 95th Street and Rockaway Beach Boulevard. It smells awful. No rest rooms and no ventilation. You can't pay fines there.

The small mobile library is overstaffed. Workers are taking up space that the patrons could be using. Not that they are doing all that much but chatting and glad handing loudly among themselves. Once in a while they put a couple of books on the almost bare shelves.

The Far Rockaway library was renovated before this Peninsula Library was. Other elaborate libraries are being upgraded. Why is Peninsula being forgotten? It's part of the delusion that Far Rockaway sustained more damage than Rockaway Beach. It's another way to take resources from the non black and non Spanish.

The New Americans Program at QBPL should be shut down and the money used to rebuild Peninsula Library.
We don't need more illegal immigrants in Queens to take away jobs, housing and resources from American citizens.

Check your facts...it was not a paint job in his private bath & shower..it was new tiling...he did not like the existing tiles