Rockaway ferry extended until May 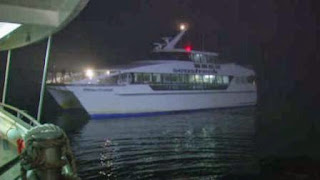 The commuter ferry service between the Rockaways and Wall Street was supposed to finish up at the end of the month, but Mayor Bill de Blasio has extend that deadline in a push to make the waterway transport permanent.

New York City is now looking for a contractor to provide the ferries, which began running after the A train was knocked out of service by Superstorm Sandy.

The $2 ride has proven very popular, and it takes just one-third of the time that the subway ride takes.

Service runs from Beach 108th Street and Beach Channel Drive in the Rockaways, then stops at the 58th Street landing in the Brooklyn Army Terminal before continuing to Lower Manhattan and East 34th Street in Midtown.

The extension until May, with an option to extend until August, will allow the city's Economic Development Corporation to issue a request for proposals to determine the viability of long-term service and identify an operator for the line.

The service, operated by Seastreak, will continue to run on its current schedule and charge $3.50 per ride.

So it will be extended, but cost more? Sounds like a winner...
Posted by Queens Crapper at 12:11 AM

Like the odious schedule for restoring the boardwalk,this is another example of the city trying to force out the long time residents there and turn it into some high end resort.

we still can't have nice things.

Car ferries are great - we should have them between Queens and Westchester. It would be such a pleasure to avoid the bridges and I'm sure it would be extremely profitable.

Ferries are a very pleasant way to commute - esp. when they have a coffee bar.

These ferries are a losing entity. Can someone please find an income statement so taxpayers can see how much
is being lost?

Car ferry from queens to westchester? Wouldn't be that much shorter than long island ferry's Orient point to new london. They charge $54, $70 for priority for a car with one driver. If you have passengers they charge extra. Might take a good bit longer than driving. I would think the people who don't want to drive would take a train, even with a cab on one or both ends of the trip.

As a resident of Rockaway, I know many examples of the city trying to force out longtime residents to turn it into Williamsburg by the Sea

But the ferry isn't one of them.

My brother gets to work 20 minutes faster than he did via express bus and (still) at a cheaper price.

If you don't like the city subsidizing the cost, that's fine. If you don't think the cost is worth the positive effect it has here, that's fine too. We will agree to disagree. But the ferry is good for Rockaway and to say otherwise is tone deaf.