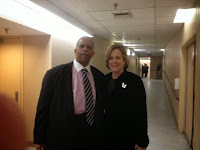 Surrounded by hundreds of supporters and a who’s who of the borough’s political landscape, Melinda Katz celebrated her inauguration as Queens Borough President.

“I am humbled and honored to be the Queens Borough President,” Katz, 48, told the standing-room-only crowd at Queens College on Thursday night.

“She’s the pride of Forest Hills,” said Mayor DeBlasio, who administered the oath of office as the Beep’s partner, Curtis Sliwa, and their two young sons watched from the side.

So she's going to see to it that all Queens-related hearings are held in Queens? That there will be enough jobs in Queens to make commuting elsewhere unnecessary? This sounds like the first of many ignorable dispatches from the Katz litterbox.
Posted by Queens Crapper at 12:28 AM

Is she going to tell Curtis Sliwa and Ron Kuby to move their new ABC weekday show to Queens?

are lobotomies mandatory for whoever fills the queens boro prez job?

Oh yeah - don't have to cross a bridge - try telling that to Whole Foods!!!! Oh wait - you can schlep out to Manhasset.

How could she possibly be the pride of anything? Wasn't she cheating on her husband with Sliwa for years??? Didn't they have 2 bastards together? Why does she get a pass on that?

And why did that other cheating bitch, MMV, get a pass on not saying the Pledge of Allegiance and cheating on her taxes to the tune of $90K?

Who the fuck is proud of these women?

And who in their right mind would be proud of Queens - esp. after reading your newer post on that wonderful home being left to rot by some Asian?

The city should confiscate it, landmark it and sell it - it's gorgeous!

Really, how about fucking coming out to Jamaica and see why so many have to go over a bridge or somewhere else. Are you even familiar with the conditions of Jamaica. Maybe you should ask your Deputy President, Comrie, who was councilman for 12 years and did very little to improve quality of life in Jamaica.

Katz, another in a long line of elected officials with their head up their ass just spouting out bullshit and nonsense.

This is what you people voted for.

Queens as a borough in general looks like shit because there's a lot of shit that moves to queens. I'm tired of seeing the homes on my block being run down by some off the boat chinese people. I am tired of seeing all these churches in my area going up and no one is doing a damn thing about it! Has anyone really seen northern blvd lately? There are 6 churches within 3 blocks of each other! Then the government "claims" that nyc is tight on room to build things! Ms. Katz, what are you going to do for us native born queens people? I doubt that you, peter vallone and grace meng or any other politician will do anything useful for queens.....all this city does is cater to illegals and foreigners! What a piece of garbage she is along with all the rest of her foreigner and illegal loving politicians!

"This is what you people voted for"

I voted for Aurelio “Tony” Arcabascio (R) but he lost and the sheepel picked Katz. Could have been worse, Peter Vallone Jr could be in office with his carpetbagging brother and screw Queens even more then Katz.

Joe Crowley held the Bible. How come her "partner", the Monkey Spanker, didn't hold the Bible? . . . with the kids surrounding Mama?

Katzland. The World of the Weird. The Twilight Zone redux.

Then, Mark-Viverito ("La Enojada" - the Angry One) comes on stage and the first words out of her mouth are "Buenos Noches".

The Muslim Imam then address the audience in Arabic.

And it says in the Pledge of Allegiance: "One Nation...indivisible..." What a joke.

Plus, the $80,000/year Marshall fotog Totino was all over the place. Hired as per diem or at the old salary?

She only said "folks" eleven times.

Please don't forget the perfect presentation of the colors by the Francis Lewis High School ROTC.

I also thought the Frank Sinatra High School Chorus was magnificent. There were at least fourty singing!

These are the positive signs for our future.