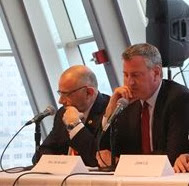 From an op-ed by former mayoral candidate Sal Albanese in the Daily News:

Many New Yorkers were heartened by the election of Bill de Blasio because of his stated commitment to transparency. He loved transparency so much that he gave it a section on his campaign website.

Unfortunately, de Blasio fell out of love with transparency long before taking the oath of office at an event that he tried to keep private.

Despite lofty promises to let the sunlight in, de Blasio has long controlled his image with a paranoia that went out of style with the Cold War. As public advocate, he issued “transparency report cards” for city agencies, yet regularly met in secret with dozens of lobbyists.

Everyone is entitled to personal privacy. But when de Blasio is delivering speeches as mayor, he is acting on behalf of the public. They have the right to know where you are, who are you talking to and what you are saying. That’s what real transparency looks like.
Posted by Queens Crapper at 12:45 AM

it got creepy in no time didn't it.

here's something for any conspiracy nuts out there.does anybody think mayor funsize really disliked the Blaz?Or was he exploiting his notoriety to push him in the front of the election race last october?

See it, say it, spell it - DeSleazio!

Oh please - he's gay, his wife's gay - their marriage is a sham and his wife just hired her girlfried as her assistant.

He's such a creepy slimeball! And I'm a Dem.

Investigation? Somebody should follow them around and get the real scoop on them!

PAY NO ATTENTION TO THE MAN BEHIND THE CURTAIN.

I will continue to pull the lever for the Democrats, because I believe EVERYTHING the Party tells me!!!!!