How do elected officials not see this? 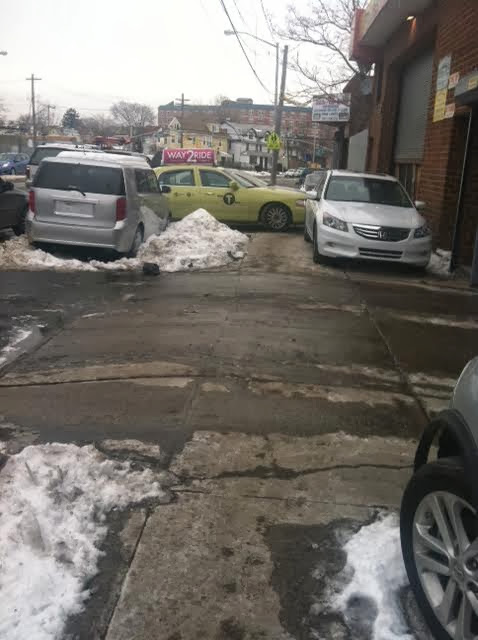 "Mr. La Mura/liaison for the borough president and Leroy Comrie/Deputy to the borough president. This is what we have to endure on a daily basis. Photos taken on saturday 1/25/14. Mr. La Mura, you said that you wanted a specific location. Well, this is Dr. Auto located on Merrick Boulevard between 108 & 109 Avenues.

This chop shop and many others along Merrick Boulevard have been operating for years. No one believes that you cannot find this location. Get a GPS and stop your irrational excuses.

Do you know who to blame for this epidemic? The law makers, you and Comrie including who are privileged to sit with them and initiate so-called solutions. Another major problem is that the victims (residents) are keep out of the decision-making process.

About three years ago, then Councilman, Leroy Comrie vowed to make sweeping changes. We are yet to see one broom. However, this is the present situation at hand.

As stated before, the chop shops have now taken over side walks. As seen in the following photos, one car is directly on the sidewalk, another is parked on the street partly blocking the yellow hydrant. 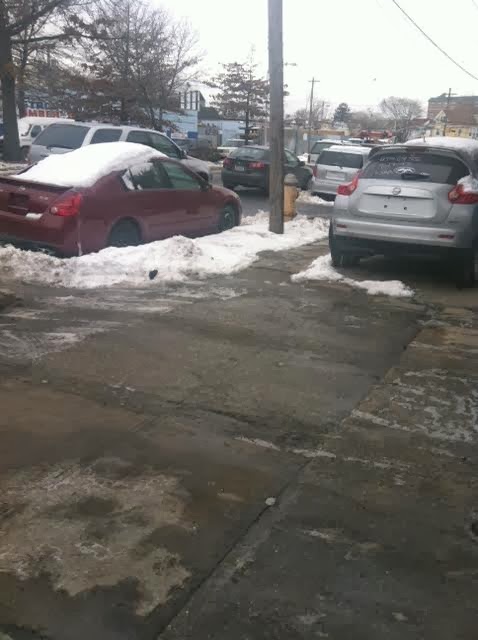 As for the green car, half is parked on the street and the other half is on the sidewalk. It is against the law, but you and your political gangsters are allowing this because it is not in your neighbourhood.

We did not choose this inconvenience. We want a stop to this inferior treatment.

Clean-up Jamaica. We are not satisfied until we get EQUALITY 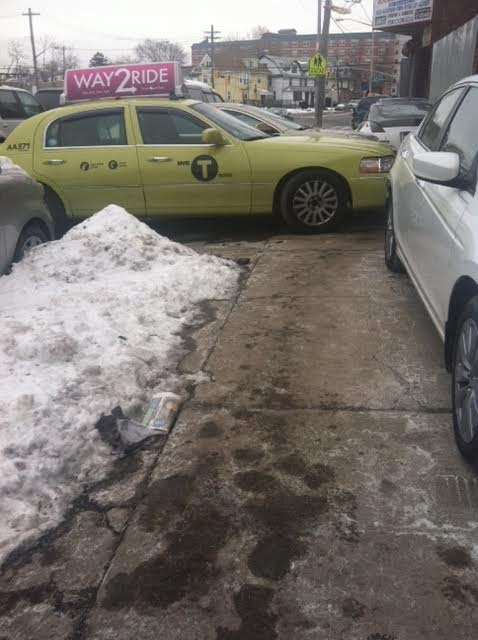 So, you all are sick of hearing about this damn list over and over. Imagine, we are forced to live in the epidemic.

Clean-up Jamaica. The world has to know how blacks are treated in the black neighbourhood.

WE WILL DO WHAT EVER THE HELL IT TAKES." - Pamela Hazel

And now the Daily News has noticed! Hurrah for Team P/J!
Posted by Queens Crapper at 12:03 AM

I am convinced that our over - paid elected officials don't give a damn about quality of life issues. All they do is pander to the immigrant community to get their vote so they can keep their job. So if you are not Indian looking for a new place to worship, or Asian looking for a legal New Year holiday, or a Sikh looking to get a law passed so they can wear their religious garb on the job, or Hispanic looking for more food pantries, then you don't matter. Whites are leaving Queens in droves, and our elected know it. They don't need your vote anymore so they don't want to hear from you . Sad but true. But keep up your fight!!!

Until it becomes the next brooklyn then all our you who fled will be wishing they stayed or at least stilled owned real estate! You people who run away from your hometown are nothing but scared complaining inbulsules and Queens doesn't need you anyway. We need people who are going to challenge the system and actually try make a difference and be proud of where they're from.

That is so true - it's rare to see white people move into Flooshing - they're all leaving.

It doesn't help that our politicians are useless (except Tony).

This has become a shit area where the immigrants can't ever bother taking care of their property or shoveling show.

They may be very nice people but they don't give a shit about assimilating - just making money and bringing more family over!!!!

They'll wash their cars but leave garbage on their front lawns!!

And forget about the rentals - we now have houses with duct tape window repairs.

Every third house is being run into the ground!!!!

Of course they see and know about it, they chose not to do a damn thing about it because the area is mostly people of color and this is a common theme with these communities, do not do anything. But when the area changes and some day it eventually will, nothing stays the same and white people move in (which since I moved to Jamaica, there are more white people that have moved here in the last two years), these black leaders and agencies will hop to it, no doubt.

PS: If white people would stop doing the "white flight" every time and go somewhere else and repeat that process again, there would not be as many issues.

The reason why white people are leaving ny is because they are tired of the rents and outrageous price of houses. Alot of white people want families and a house but they land within minimum wage standards. I'm white and I live in a one bedroom apartment with my husband and daughter. My husband is on disability because he got into a car accident, so I am the only one working and can't afford a 2 bedroom apartment right now (atleast in a decent area). I will probably end up moving out to Jamaica by the end of this year, I am looking for a place when my lease is up. Its sad how the government hands everything to immigrants and illegals and does nothing for the middle incomers. My father was right when he said "this city is for the haves and the have nots". It's a shame.

Crapster,
You once published photos of a body/tow shop on Flushing Ave. at 60th street in Maspeth. You should go back there and see the mess; cars parked on the sidewalk, damaged cars on the street with no tags, flatbeds parked in driveways, etc., a freakin' disgrace.

At first glance I thought that photo was Willets Point !
True elected officials only pander to the immigrant community to establish a democrat voting base forever.
Stupid Queens voters placed them there by voting democrat for the past 30 or so years. This habit started long before all these immigrant slobs came here.
Now sit back, pay the price and enjoy your punishment things are only going to get worse. These slobs are having loads of kids who will repeat the process. Your looking at another south central Los Angeles in 10-15 years.

I still cant sell my house in Ridgewood, white buyers take one look at the 2 local schools flooding the streets like some gangsta ridden jailyard and head for the hills. The white middle class that fled 8-10 years ago got out just in time.

Being a landlord is no bed of roses. You cant rent to these all these "new people" BTW they are all feral slobs that have loads of protections. They will destroy your house, drop baby's, put kids in school, stop paying rent and it take's over a year's in the liberal courts to get them physically evicted.
This is happening with my friend next door. The courts refuse to evict a female because she just spit out baby (has her mother now living with her). Meanwhile he's faced with arrest and jail if he turns off the electric, heat or changes any locks. Court order by an immigrant judge who can barely speak English himself !! !!