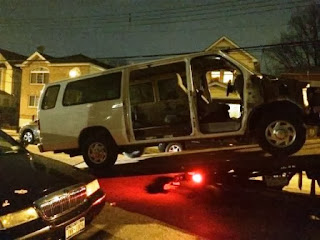 Police stripped a South Ozone Park home of auto parts on Monday after discovering an alleged chop shop operation at the residence.

Todd Archer, 30, and his girlfriend Tiffany Evans, 21, were arrested after cops found stripped vans, vehicle parts and tools at the 134th Street home.

Local resident Ian Kusinitz rents out vehicles and installed GPS monitors on each van and car. One of his vans was stolen, and he tracked it to Archer’s home. He then spotted some of his van’s parts on the side of the house, according to a police source.

Kusinitz called the cops, who responded to the scene on Monday, January 13. Officers were let into the home by Evans. Inside and around the house they found a variety of auto parts, including headlights, doors, center consoles, benches and more.

Archer’s backyard, where he allegedly works on the vehicles, can be seen from neighboring houses, but cops never received a noise complaint or anonymous tip.

People in the area were too busy being vibrant and diverse to call it in.
Posted by Queens Crapper at 12:13 AM

I find this whole article amusing. I have reported so many times all the abandoned vehicles in Jamaica, including a boarded up vacant lot in between two houses in Jamaica that had about 15 abandoned cars, some with plates, some without, some looked like they had been there for years and when I walked into the 103rd precinct to tell them what I saw they told me there is nothing they can do since it is private property. They then tell me it is a sanitation problem, yet they seemed to find nothing suspicious about 15 abandoned cars in various conditions in a boarded up vacant lot between 2 houses. You can see my photos at http://cleanupjamaicaqueens.wordpress.com/2013/12/10/plot-thickens-with-owner-of-vacant-lot-strewn-with-abandoned-vehicles/

So I question the statement "Archer’s backyard, where he allegedly works on the vehicles, can be seen from neighboring houses, but cops never received a noise complaint or anonymous tip."

Even if that statement is true, if someone did make any complaints it would have been passed around from one agency after another and more than likely no one would have done anything, just like when I reported the abandoned cars in these photos, some were reported since summer and they are still there. See here http://cleanupjamaicaqueens.wordpress.com/2013/12/09/black-leaders-have-totally-failed-south-jamaica/

According to Paul Krugman, this is all good for the economy.

Precisely. Now you know why the Queens pols just jump for joy every time the word 'immigrant' is mentioned.

All the boroughs have immigrants, but only the Queens pols have such a fixation for this word.

Makes sense. They don't have anything else to say.

Fortunately for this vehicle's owner GPS was installed. Most older model vehicles do not have these devices so when the vehicle comes up missing it is at a total loss to the owner. The stolen car is then hidden away in someone's yard or chop shop to be stripped down for parts. All the thief needs is access to a flatbed/tow and they're in business. They post these parts on classifieds and random online postings for profit.