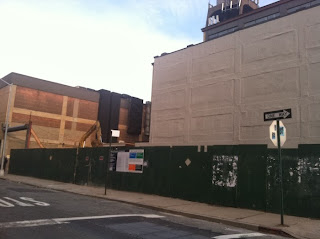 Boris Aronov, co-developer of Tribeca’s 101 Leonard Street, has paid $26.5 million for a development site on the Astoria waterfront, according to city records filed Friday. The 160,000-square-foot lot at 3-15 26th Avenue was marketed last year for $80 million as being ripe for an 800,000-square-foot residential site, but it’s currently still zoned for manufacturing, and sources said that the low purchase price was due to uncertainty about when the site would be ready for a residential project.

The seller was Le Noble Lumber Company, according to public records, which purchased the site in 1984. Avison Young’s Jon Epstein, who represented Le Noble along with colleague Arthur Mirante, attributed the large gulf between the asking and selling price to the fact that Le Noble decide to sell the site “as-is,” rather than securing a zoning variance. This means Aronov will now have to handle that costly and time-consuming process if he wants to build apartments.

Although Queens Plaza has succeeded in luring residential and hotel projects, it has been slower to attract new office buildings. Turning Long Island City into a central business district to rival Jersey City was a Bloomberg administration goal, but brokers who specialize in commercial real estate say that a significant influx of office tenants is still years away. “It’s been more of a trickle than a flood,” said John Reinertsen, a senior vice president at the brokerage firm CBRE, who is based in Long Island City.

Another hotel for Long Island City? Can’t say we’re shocked. The Department of Buildings issued a new building permit in December for a ten-story, 74-room hotel. The location in question, 40-47 22nd Street, is right on the corner of 44th Avenue and 22nd Street. According to signs on the construction fence, the ETA is for the summer of 2015.

Great, this is just what Queens needs!
Posted by Queens Crapper at 12:08 AM

See the other stories in QC on political corruption and think about this: the government to so powerful that the signatures of some electeds and some bureaucrats on a piece of paper is worth $54 million to someone.

With money like this at stake due to where and when the government presses its thumb down of the scales of private property, corruption is baked into the system. This is one project and so multiply this by one thousand.

The Hallets Point development will start to experience a series of floods from hurricanes. Its awkward location will take money from something else just to maintain - which means that after much fanfare it will quietly be withdrawal.

This development (some 25,000 more people when its all said and done) coupled with the projects and its inaccessibility almost guarantees an urban nightmare that will make Pruitt-Igoe child's play.

The development that the Vallones and Queens Community Board #1 will give the city will be a festering sore for the next century.

PS Check out my comments today on the 7 train repairs...

The area may need more business development but as far as residential it has exploded. I have lived in Queens my whole life and bought a place in LIC a few years ago. The prices have increased so much and I am constantly asked if I am interested in selling.
I may because I would walk away with a great gain.
I does need more restaurants.

there are plenty of prospective maps online to show what the next major hurricane will do the 5 boros and they continue this idiocy of building near the water,and for what?for a nice view?this are not europe,hawaii,or puerto rico.

the braniacs at the EDC are like the folks who continue to smoke cigarettes despite knowing the risks of cancer.