Because what Fresh Meadows needs is another hotel 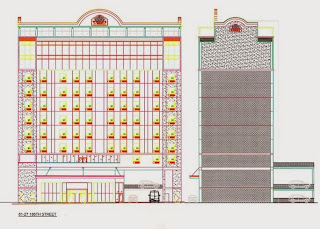 Fresh Meadows residents are hoping to pressure the city to stop the construction of a hotel on 186th Street, but the development can proceed “as of right,” meaning it does not need variances to proceed.

Neighbors along the narrow residential block near the eastbound Horace Harding Expressway say the structure, which is slated for 11 or 12 stories, would loom over their homes and wreak havoc with the overused sewer system in the area.

Two years ago, the developer, Mayflower Business Group of Great Neck, was turned down by the Department of Buildings for a 12-story plan based on inadequate parking [48 spaces] and a too-dense floor-area ratio.

The group’s latest proposal, according to the website of the contractor, Crosscity Construction of Long Island City, calls for an 11-story hotel with 147 rooms and 42 parking spots.

Although the project is as of right, the developer must still meet city guidelines.The 77,000-square-foot project would be built at 61-27 186 St., the site of three former houses and is next to the Michaels arts and crafts store parking lot.
Posted by Queens Crapper at 12:29 AM

I lived in the apartments on 188th and 64th right next to the shopping center.

I'm really curious why someone would want to build a hotel there because there is nothing there besides resident homes, apartments and a mediocre shopping center.

The only pluses are that its close to a lot of highways and both local and express buses that go straight to Manhattan.

Who would want to stay there?

There's no public transpo to the city (busses don't count).

It's in the middle of nowhere.

Is this a way of sneaking in an SRO or homeless shelter?

What does you councilman say?

What does you community board say?

What steps are they taking so this doesn't happen again?

What things are they doing this month that is more important (in their minds) than this issue?

live about half a mile from there. why on earth would someone build a hotel there? or want to stay there? if the tourists dont mind taking the QM1 back and forth to get into the city and eating red mango everyday then it works out. its a suburban area, i dont get it.

Endlessly asking why someone would build here is beside the point : why can they - and how we can stop this - is more the issue.

This isn't that far from the airports, or flushing meadows. Reasonable place to stay if you're driving in from points north. If you want to drive to a mets game or tennis match, this wouldn't be the worst place to stay. Could attract those who want to stay in NYC, but don't want to take transit at all.

Them people want a big hotel so the huge Jewish center on Community Drive & LIE can do more business and catering.
The Persian Jewish in Great Neck have these HUGE weddings, Brisks and things. Sometimes 1000 or more people.
There is no more room to build in Great Neck (it only has 1 small hotel)and Manhasset wont allow it. Queens will, because its polititions are corrupt and Persians in Great Neck have loads of cash $$ from diamond district, importing electronics and real estate.

Joe, Brisk is my cup of tea. I always drink it at a wedding.

Our congregation no longer uses metzitze b'peh. We now dunk all the schvantzes in Brisk to stanch the bleeding.

"Whatever" the F its called George. I rented a sound system, LASERS and lights these people ONCE. They were impossible, nasty pricks who continued to break my balls nickle & diming me on everything after they agreed and signed the contract. Then tried to pay by check when the deal was full payment cash at load in.
HORRIBLE people, those residents in Fresh Meadows are in deep DEEP DEEP shit with these a'O people !!

Joe, what kind of music did you play? Metal? Klezmer? Broadway show tunes?

Didn't play just rented out and ran my sound system the band was some popular group from Iran they sounded like slamming electric war music. (It was actually good).
What I noted about the Persians is the really old people are good its the the young ones under 50 that are the assholes.
Back in the day I played rock we had albums out, FOH engineer on many tours. Now (summer only) classic rock and oldies to get the $$$$ "family music" street fests, fairs, yuppie weddings & private party's during summer. Mostly R&B dance music some Beatles, Rascals, Badfinfer, 80s (we don't play metal or bars both don't pay squat

Soon to be a hot sheets motel. It's sooooooo obvious.

Is OK this area needs a place like this. the people that use hot sheets and craigslist for dating no want problem they are very quiet so all these peoples no need worry.

It will be used as a money laundering center. Mark my words.


I was at a meeting with the developers of this hotel at Senator Avella's office, so I hope this ends some of the speculation.

According to their representative - George Frangoulis, who used to be the Community Assistance Unit liaison for Queens during the Giuliani administration - the hotel is being funded by oligarchs from the city of Wuhan, China in primarily to set up a "temporary housing" situation for college students coming from that part of China.

Frankly, while this hotel is being built "as-of-right" (no variances or special permits needed) it is a horrible location, across the street from detached single-family houses and on a very narrow residential street.

There are some minor glitches with some of the permits for this building, but I'm not sanguine that it will shut down the project for any length of time.

Chaos will prevail when this thing opens.

To everyone asking why it's being built, the better question is why is Marriott building two directly on the other side of the LIE. It's clearly a hot area for hotels.

Queens will soon be an epicenter of hotels!! In LIC existing 25 tall operative hotels, will soon open add 25 multi storey hotels, Jamaica will soon huge Hilton Hotel, Marriott will have 2 hotels across LIE with 325 rooms within FreshMeadow 12 storey; another hotel at Northern Blvd aside from existing Ramada Hotel & another hotel across it, several hotels are being built @College Points, Far Rockaway. Existing Fresh Meadow -Kew Garden Motor Inn & Par Inn etc. Huge existing hotels near the airport. Eventually, there will be over saturation of hotels - which might end up as homeless shelter just like the PanAm Hotel in Queens Blvd. This could destroy the homeowners investments & neighborhood. Many hotels are used as "birthing hotels" of Chinese pregnant women, a tourist program advertised in Chinese where they conceal their pregnancy and give birth to US citizen babies, taking advantage of hospitals bec. they do not have health insurance.
The Chinese investors under EB-5 visa pulled their money (+-$500,000) for greencard). Sad to say, Malta offers $1.3 Million for greencard/citizen.
.