Fireworks over Bell Blvd is a Vallone priority 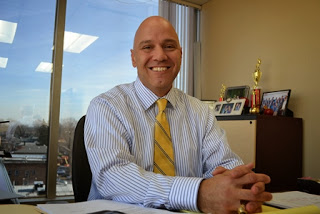 Councilmember Paul Vallone wants sparks to fly during his time in office.

The freshman legislator launched idea after idea — including shooting fireworks on Bell Boulevard and hosting movie and game nights — during a two-hour interview with The Courier.

“I want to bring back that old-time feel,” he said, gazing at the boulevard out of his fifth floor Bell Plaza windows.

“You look at things from a different perspective,” he said. “As a father, I think, ‘What would my kids want to do?”

His long list of plans for the district also include having quarterly roundtables with the district’s community groups and starting up a new Student Ambassadors program in February with three local high schools.

The initiative allows about 10 juniors from Holy Cross High School, Bayside High School and World Journalism Preparatory to serve for a year as community representatives.

Fireworks, movie nights and roundtables. Wow, those are some lofty goals. Is he an elected official or cruise ship entertainment director?
Posted by Queens Crapper at 12:30 AM

Crapper - this is hilarious!

I think the best part is something you left out - the title of the article:

If these are BIG ideas, I would hate to see the small ones.

So glad I voted for Stinky. He's so,so, uhhh, stinky.

Given the committee assignments he was awarded those big ideas will probably be the milestones of his accomplishments.

It doesn't sound like city council wants to play with stinky.

you know what else has an old timey feel,a mob throwing eggs at a hated elected official.

and that self-satisfied smile...keep him away from the kids.

I wonder WHO voted for him, because I know it WASN'T me.

World Journalism Prep? What a scam school. One year they fired their Latin teacher and replaced her with Miss Stone, Rosetta Stone. The kids learned nothing.

The principal is a snake oil saleswoman who cannot be believed or trusted.

Since this fool will accomplish nothing during his term he will not harm anything. Hopefully.

Wow....how about stopping your plans for that new school at kiels brothers instead?

The garbage men actually place the lids back on his cans after they collect.

It's Bell Blvd even an appropriate or safe place to have a fireworks show?

"It's Bell Blvd even an appropriate or safe place to have a fireworks show?

He puts him mouth in gear before his brain. That is if he has one.

Maybe Stinky has been consulting with his mentor, Dan O'Halloran, for these brilliant ideas. Next he'll say that Bell Blvd needs more drinking and bars. "Give me that old time religion!"

Maybe Stinky has been consulting with his mentor.........

And fireworks, movie nights and roundtables are what he wants to do? Hey pal, Vallone CAN'T do whatever he wants to do. He's the lowest ranking member of the council outside of Lancman, because he slept with the dogs (County) and woke up with fleas. He's worth less than dirt to the Speaker and Mayor. This is gonna be a fun 4 years. You doofuses in northeastern Queens chose THIS meathead to represent you. ROFLMFAO!!!

I think it's painfully obvious that Paulie V. can't do anything that he wants to do. Anything.

Vallone was not placed on a single committee of any importance or influence (i.e. Finance, Land Use, Transportation, Economic Development or even Education!). Even Dan Halloran was on the Land Use Committee, for Christ sakes.

This simply means that he is out of the loop on all major decisions that will happen in the city and, to some extent, his own district for the next 4 years.

It sure doesn't follow his sweeping statements from when he ran for office last year. Oh. Wait a minute: he said NOTHING OF SUBSTANCE during his campaign and that's what he's planning to do for District 19.

You've gone from someone who actually gave a shit, did something to fight for your communities by curbing overdevelopment and kept his promise not to run for a 3rd term (Tony Avella) to a crazy indicted person who sold out for chump change (Dan Halloran) to an empty suit who savagely insults anyone who doesn't subscribe to his weird cult-y ways (Paul Vallone).

Adam just do Vallone and get it over with.

I would have loved to be proven wrong, that would have meant Vallone was doing great things for CD19.

Stinky proves me right everyday. I'm not bitter I'm just sad for my community and the fact that bad guys have Vallone in their pocket and the good guys won't associate with him sucks for us.

Every time little smurfs like you say things like "Vallone can do what he wants" you are proving all the "bitter" people right. That's such an ignorant comment.

You may want to make passionate love to stinky but you are not doing him any favors, you make him look like an idiot with your stupid comments.

Are we sure this is Adam and not Chuck?

Kindly consider putting the Huang project on 223rd Street on your to do list?

With all your power surely you can endeavor to get something done about this "unsafe" and "illegal" project. It continues to deteriorate!

Let's just rename Bell Blvd, Stinky Blvd and be done with it.