After 10 years, it actually may be "coming soon"! 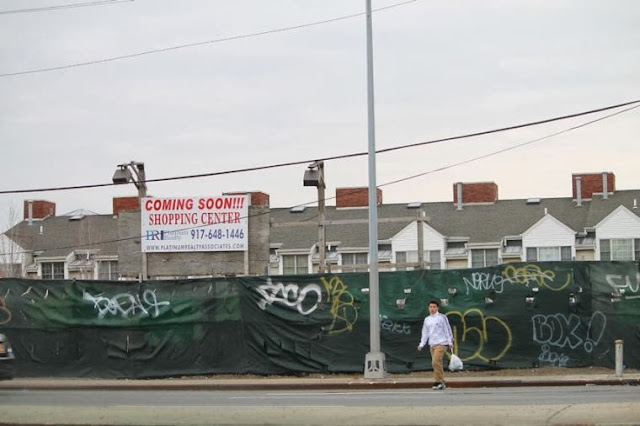 The lot on Cross Bay Boulevard between 149th Avenue and North Conduit Avenue in Ozone Park has sat vacant, surrounded by a fence, for more than a decade. Back then, a giant sign on the fence at the site, which sits adjacent to the Magnolia Court housing development, advertised a strip mall or commercial center that would be built to suit a potential buyer.

That sign is gone now and the fence, now covered in graffiti, is also starting to show its age.

But that may soon change, as the developer who owns the site says he expects to start work there this winter.

The new owner is Platinum Realty, a Brooklyn-based developer that has built strip malls in Brooklyn and Metro Plaza at 71st Street and Metropolitan Avenue in Forest Hills. It is also constructing a new strip mall at a former gas station site at Rockaway Boulevard and Centreville Street, about a mile away.

Dave Koptiev, a representative from Platinum Realty, said they are hoping to break ground on a strip mall on the site once they get final approval from the Department of Buildings, which he hopes will be very soon.

“We’re just waiting for our permits, which we expect will come in the next few weeks, and then we can put shovels in the ground,” he said.

Koptiev confirmed that a strip mall is to be built on the site, but said there were no tenants yet.

I have to thank the Queens Chronicle for revisiting this, because I was planning to write about it, but always found myself in the area after sundown and couldn't take pictures.
Posted by Queens Crapper at 12:11 AM

So we can probably expect to see a Subway, Dunkin Donuts, and perhaps a Walgreens. Same old crap!

thanks to awful resorts world,there will most likely be a pawn shop,and with the demands of the "free market",another cell phone store and 99 cent store.

maybe a realtor for basement and cellar apts.

Yes, you're right. Another pawn shop. Any input Mr Addabbo?

This is one of those rare cases that seeing a Subway, Dunkin etc is probably BETTER than what is there now, which is a rotting construction site