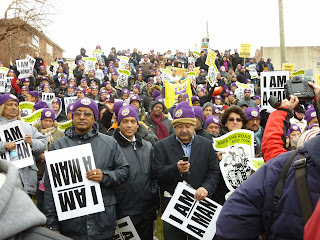 An act of civil disobedience outside of Queens’ LaGuardia Airport landed several elected officials, community leaders and airport workers in the back of a police truck after they called for equality in remembrance of Martin Luther King, Jr. The group held a booming rally Monday morning centered on poor working conditions and unfair wages near the airport and then marched down the nearby 94th Street bridge to block traffic, where the arrests followed.

“The City Council stands untied to support you, airport workers, in your demands for dignified work and respect,” said Speaker Melissa Mark-Viverito alongside colleagues Councilmen Costa Constantinides (D-Astoria), I. Daneek Miller (D-Jamaica) and Donovan Richards (D-Laurelton). “We have seen a mobilization across this nation of fast food workers, car wash workers and now airport workers. We will ensure that we stand with you.”

The protests were in support of the service workers union 32BJ SEIU, which organized petitions signed by more than 2,000 workers demanding MLK Day become a paid holiday, but to no avail. Union President Hector Figueroa, who was also arrested, said the airlines and Port Authority have refused to listen to workers’ pleas for the simplest of perks, such as paid sick days and wages above $8 an hour.

Ever notice that pols only turn out en masse for a rally when a union is involved?
Posted by Queens Crapper at 12:27 AM

Working slaves while Johnny and Mary's parents gets to fly their family cheaply to Disney on the backs of the working poor.

"If I went to work in a factory the first thing I'd do is join a union."
Franklin D. Roosevelt

That's a funny pic...The two guys in front look like they are there just for the hell of it. ...One dude is checking his phone and the other is holding his sign upside down.

Things like this are to be resolved at the bargaining table.

Also, plenty of non-union workers have MLK Day as a paid holiday. It's not a "union thing".


Yes to remind the authoritative elite they earn wages from that they are human as well and deserve rights to a better quality of life. These are taxpayers working in all extreme weather conditions and moving on their feet continuously for barely enough to support their families. They are using a well-known slogan from the civil rights era. It's important to know history or it will repeat itself until society rectifies it. Workers rights is a civil and moral issue.

Nothing stopping them from getting an education and being on the plane instead of loading it, except for poor life choices.

The pols show up for a tweeding photo ops like this ...

then look the other way while development displaces these workers from one cellar and illegal fire hazard to another, schools for their kids house rather than teach, and hospitals close.

But since they mindlessly vote Democratic who cares?

Things like this are to be resolved at the bargaining table.
---------------------------------
I agree. Shenanigans like this do absolutely nothing except give politicians their much loved face time, make these schmucks believe that their union membership actually cares about them, tie up our criminal justice system with frivolous nonsense and waste police personnel and resources that could be better utilized elsewhere.

It's an unskilled job! How much do they expect to earn?
Go to school and get a better job!

I don't see one honest o goodness American in that crowd. Is anyone checking their documentation?

Anonymous said... "Nothing stopping them from getting an education and being on the plane instead of loading it, except for poor life choices."

Working men and women are the salt of the earth. Not everyone gets the same breaks in life such as a chance at a college education.

Actually, in NYC everyone does. It's called CUNY.

Of course, you might not have the time to go to CUNY if you were working three minimumm wage jobs to make ends meet and had kids...

Who told them to have kids they can't afford? And I sat in classes at CUNY with people who worked minimum wage jobs full time.

Not everyone can have a college degree so why the hatred if they are in a Union ? Class warfare will only benefit the rich billionaires. Unions protect worker rights.

"If there is no struggle, there is no progress. Those who profess to favor freedom, and yet depreciate agitation, are men who want crops without plowing up the ground. They want rain without thunder and lightning…" Fredrick Douglass

This is crap. Deport these non Americans. Where are the American Citizens in that photograph? These people would harass, menace and make any American working with them miserable and/or lie about them to supervisors to get them fired. . Deport them all back to Bengla Desh.

The I am a Man sentiment is something from Martin Luther King.

How about implementing better security there?