Grace's brother is in a bit of trouble 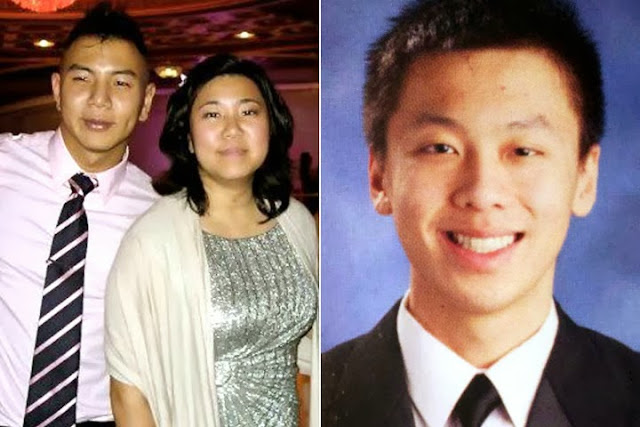 The brother of Rep. Grace Meng could face a homicide charge in the hazing death of a Baruch College fraternity pledge, according to a Pennsylvania law-enforcement official close to the investigation.

Andy Meng — the younger brother of the Flushing Democrat and the president of the Pi Delta Psi national fraternity — could be charged with manslaughter or murder if he helped delay medical treatment for Baruch pledge Chun “Michael” Deng, the source said.

“He is a person of interest,” the source told The Post. “If by deliberate delay someone’s ability to seek medical help was compromised, then that could be a form of homicide.”

Deng, 19, died Dec. 8 from head injuries after fraternity brothers blindfolded and tackled him in the freezing cold. He was not taken to the hospital until more than 90 minutes after he was knocked unconscious, and fraternity members changed his clothes after pummeling him.

Pocono Mountain Regional Police and the Monroe County district attorney are examining phone records that show Meng, who was not at the house at the time, was in contact with the Baruch frat boys “immediately after” the hazing, the source said.

Meng, 28, of Bayside, is also being probed for whether or not he ordered the destruction of evidence after the incident. He’s suspected of instructing Pi Delta Psi brothers to get rid of anything with the frat’s insignia on it before police arrived, the source noted.

Meng is a national rep for Pi Delta Psi, a Flushing-based Asian-American fraternity founded in 1994. After Deng’s death, he announced that his umbrella group would revoke the Baruch frat’s chapter.

Now we can see why the family sent Grace to law school.

Apple doesn't fall far from the tree, does it?

I take issue with your characterization "28-year-old far boy."

First of all, people can attend college at any age, especially in a time when many of us are changing careers or working a few years in order to pay for college.

As for frats, they're not only for partying. Fraternities create lifelong friendships and job connections.

So, I guess he will get special treatment as opposed to if it was someone else.

No, I think the police are concentrating on those who were physically present at the site in PA where he died, or was beaten to death - they're the ones who need to be prosecuted. Then if one of them says that they called the national office for advice...

And working for the national organization's office doesn't make one a frat boy - it's an administrative job.

Fraternity presidents are typically elected by the members of the fraternity and are active pledges. President is not an admin job.

her brothers mistakes shouldnt fall on her.

he has his own problems and should be left with him.

He ordered the tampering of evidence. This is the actions of someone who had knowledge off wrong doing. Seems he continues in the footsteps of his family.

This is incredible! Father and son get on wrong side of law and Meng gets into Congress! WTF!

Hope all the guilty culprits are brought to justice for the senseless murder of this young man(R.I.P.) Sounds like suspicious plotting took place in the time lapse this was reported to the police to cover up all tracks. If he was aiding in this scheme then he must be charged as well accordingly.

Whatta family!
Her dad is a crook and now her brother looks like he's an accomplice to murder.

AND YOU DOPES elected "El China" to Congress.
Who's the guiltiest party of them all?

If he was aiding in this scheme then he must be charged as well accordingly.

Amen to that. The Meng family is not the Kennedy family - I don't think Grace would have the pull to protect anybody. She's lucky to have survived her father's scandal, so she'd be a fool to try to intervene in this. Let the police investigate, and let the chips fall where they may. A young man is dead and those responsible should be punished.

He'll get off and run for the flushing council seat and everybody will vote him in.. Another NYC success story!

Looks like a conspiracy and tampering with evidence charge(s).

He looks stoned in the photo.