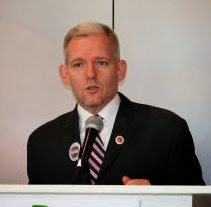 City Councilman Jimmy Van Bramer is calling for an oversight hearing on the Queens Library, following news reports about the library system's president collecting a large salary while shedding more than 100 jobs over the past five years.

Van Bramer, the council's new majority leader and chairman of the committee on cultural affairs and libraries, called for the hearing following stories in the New York Daily News that said Queens Library President Thomas Galante collects a $391,594 salary and spent $140,000 last year on renovations for his offices at the Queens Central Library in Jamaica, including a "private smoking area."

The library has eliminated nearly 130 jobs over the past five years, the paper reported.

In a statement, Van Bramer — who worked for the Queens Library for 11 years before his election to the City Council — called for "an immediate oversight hearing on the Queens Library, its Central Library project and its operations."

"Stories of private outdoor patios and questionable spending deserve great scrutiny and they will get it," the councilman said.

So let me get this straight...Jimmy worked for the library for 11 years, has been chair of the library committee since he entered the council in 2009, and regularly hobnobs with these people at cultural events, but he didn't know a thing about what was going on until the Daily News story?
Posted by Queens Crapper at 12:12 AM

So let me get this straight...Jimmy worked for the library for 11 years, has been chair of the library committee since he entered the council in 2009, and regularly hobnobs with these people at cultural events, but he didn't know a thing about what was going on until the Daily News story?

Throw the book at them all. Pun intended.

like Obama and most spineless Dems,Jimmied thinks acknowledgement of a problem is enough but won't act on it.

Sooner, as opposed to later, these three will fuck up big time. Hopefully they'll take Stinky with them.

It's nice to finally see SOME public outrage, considering that libraries now are now used primarily as free, noisy daycare centers instead of reading and learning establishments!!!!

Only a matter of time that nyc becomes detroit. ..huge salaries, huge pension cost, no union contracts. ....yep we are definitely headed In the right direction of being the next detroit meanwhile people are leaving ny state in masses. Nyc is a city for the haves and have nots.

There seems to be a pattern to these city council members "not noticing nothin'". From a couple days ago:

Julissa Ferreras headed the board of directors of LIBRE, the Latino Initiative for Better Resources and Empowerment, when it was looted by then-Councilman Hiram Monserrate.

As a Council member, Monserrate steered $300,000 in city funding to LIBRE and then diverted $109,000 of the money to pay people to work on his campaign for the state Senate.

Is a lack of intellectual curiosity a requirement to be a city council member?

Or do they all act like Sergeant Schultz from Hogan's Heroes - "I hear nothing, I see nothing, I know nothing!"

Sounds like Jimmy wants to put one of his own in Tom Galante's chair.

Even better than JVB - NYC Comptroller Scott Stringer will audit the Queens Library. Let's bring more daylight to what's been going on there.

Talk to librarians. They are overwhelmed with children as young as 4 dropped off without adult supervision. The reason many libraries extended hours to 7pm was frankly because at 6pm they were constantly being forced to keep the library open to wait for parents to collect their children aged 4 thru 8 who could not be left behind on the library steps after the library closed.

Of course, they cut back on employees...the $$ is needed to pay for the Council members' "lulus" and for the members items they will be doling out!

We call for an investigation of the governing bodies of the Queens Library by the Mayor DeBlasio.

Jimmy Van Bramer has close ties to the library and should, to retain something of his rapidly slipping public credibility, recuse himself.

We ask that the Mayor include a review of the outside organizations and real estate holdings that the people involved with the governing of this organization to ascertain potential conflicts of interest.

We ask for a board of outside library professionals drawn from around the country review and grade the organization.

Yea, 'spineless' is a good word for the left.

if you talk to green groups and the Occupy movement and young people in general there is a big love for the library cause it has 'green' programs.

Its a gambit and its a good cover. A bit like certain groups that go into the ghetto to soften it up for development and displacement.

The fact that this is run by a group of people that have a big hand in the (mis)development of the borough doesn't register.

Who needs libraries in this day and age?

Based on the salaries of the three Directors/CEOs, that person would have to get a salary of $1.5 million.

I am sure that all employees, you know, the children of immigrants and working mothers and all the favored tweedered being mistreated at the library by fat cats, will draw the ire of the Democratic Party in Queens - the traditional voice of the down trodden.

Be also prepared for a barrage of irate criticism by the Queens weeklies, our 4th estate guardians of traditional democratic values, that fat cats misusing public monies has no place in Queens!

I realize that a broken clock can be right twice a day, but still find it interesting that it was Liz Crowley that set old Jimmy off.

What a surprise-not. VanB and every pol should have to fully disclose the payroll of any non profit they provide taxpayer funds to. When they take public money it should all be out there for all to know how much they are raking in while crying poverty.

Belive me, Big Money Man Tom Galante used to be much thinner before he started making that huge salary as "President and CEO."

Melinda Katz has jumped on the bandwagon now, too.