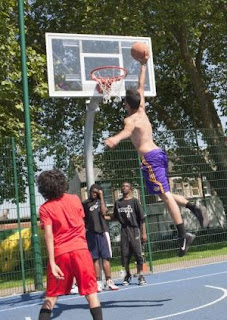 A Bloomberg administration plan to sell naming rights on dog runs, basketball courts and other spots in municipal parks has been a bust, leaving the city with a $13 million hole in its budget, a budget watchdog said Tuesday.

No one applied to the revenue-raising program, which the Parks Department launched last year in partnership with NYC and Company and IMG, a sports marketing company, the Independent Budget Office said.

But while the city made no money, IMG did.

All of that money came from private donations, provided through NYC & Company, according to a spokeswoman.

The city will continue trying for sponsors in the next budget year, when it is counting on the program raising $7 million, according to the Independent Budget Office.
Posted by Queens Crapper at 12:07 AM

Thank goodness that the people gave the mayor an illegal 3rd term to get NYC out of the economic downturn plaguing the entire country. This financial genius got us out of a deep hole. What's that? Oops. my bad. The midget mayor got developers out of the financial muck and mire. The $13 million loss from the billboard advertising program was someone's gain. Discuss!

Who would want to attach their name to a run down, filthy, ill- maintained, dangerous, city park ...especially in Queens?