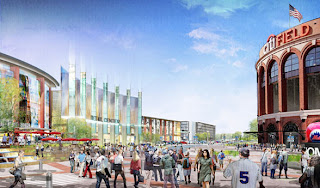 The development group selected to build Willets Point planned to replace about 32 acres of parkland in a 2011 failed proposal for a casino complex, but now contends its current $3 billion project does not require it.

A partnership between Related Cos., a Manhattan developer, and Sterling Equities, the real estate arm of the New York Mets, is currently seeking approvals to construct a 1.4 million-square-foot mall in the western parking lot of Citi Field, which is mapped parkland.

The mall is part of a plan selected by the city to build housing and retail space on 23 acres of the Iron Triangle, a neighborhood of auto shops and scrap yards on the other side of Citi Field, and clean up toxic soil there in the process.

According to the state Parks Department, whenever parkland is leased, sold or discontinued, it is considered alienated. No statute stipulates that it must be replaced. Instead legal precedent called the Public Trust Doctrine often mandates that it should be replaced if the matter is taken to civil court.

The developers said they are not legally required to replace the roughly 32 acres of asphalt, technically part of Flushing Meadows Corona Park, that would be taken up by the mall.

The reason behind this decision is a 1961 law that leased the parking lot area to the Mets and allows them to use the land for any purpose that benefits the team, the developers contend. Since Sterling Equities is owned by the same people who own the Mets, the group maintains that the law holds water, although critics have argued the statute was never intended to allow such a large development on the land.

But the city considered park alienation in an earlier proposal.

In September 2011, the same developers submitted a plan — which was ultimately rejected by the city Economic Development Corp. — that called for a casino, mall and hotel on the Citi Field parking lot and the section of Flushing Meadows where the current mall is now proposed.

A letter dated Oct. 13, 2011, was sent from Sterling and Related to Ian Klein of EDC. In it, the development team answers a list of questions posed by EDC.

“Have you identified replacement parkland pursuant to requirements for parkland alienation?” the city asked in the letter.

According to that proposal, the land would have been sold to the developers — not leased. This would have nullified the 1961 law and created a new alienation scenario, essentially requiring the partnership to replace the land.

The development team proposed to do so directly on the Iron Triangle.

By the way, did you know that CB7's land use committee voted the project down in a landslide 7-2 vote this past Wednesday? Did you know that Chuck Apelian and Gene Kelty were among the no votes? Let's see what happens Monday night at the full board vote.
Posted by Queens Crapper at 12:54 AM

It's called welching on a deal...or land theft, if you like!

In a Deadwood poker game, a man caught cheating was often shot on the spot.

LOL!
Too bad we can't do the same here.

Watch chucky boy further give these guys a pass Monday nite at the cb7 hearing........beware chucky the Feds are watching

So the edc thought this was park land and now they believe the mets that it's not...how conveinent .....all eyes should be on this vote Monday.all eyes pointed towards the one who offers conditions and the ones who except them..

Word on the street is that the committee will meet Monday at 5pm to have a re vote with conditions.

No announcents will be made in an attempt to hide under a veil of secrecy.

Be alert, be VERY ALERT!