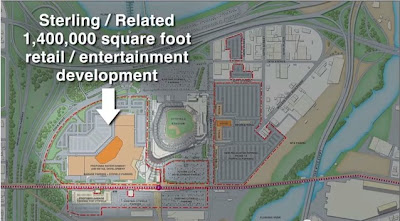 Well, well, well. We suspected it was too good to be true, and it was. CB7's hastily called Buildings Committee voted 10-6 in favor of the Willets Point West project last night. You have to wonder why no one on the board thought it was wrong to take a re-vote when the original vote was cast after giving the developers and the City more than ample opportunity to make convincing arguments. Then, after hours of public testimony, the full board voted 22-18 in favor of it. The vote may have gone the other way if some board members hadn't conveniently left the meeting before the vote was held.

A shameful sham.
Posted by Queens Crapper at 1:04 AM

Kelty cut public speaking time to just 2 minutes, although the hearing notice specifically said 3 minutes. So, there were people who prepared statements timed at 3 minutes, who were then cut off at the hearing before they finished. This was supposed to be a public hearing. The least they could have done was allocated the noticed time to hear from the public.

Call and email these people today and complain like crazy!

Let these weasels know what you think! Have your friends call! Have your relatives call!

Bombard them with complaints!!!!

"Call and email these people today and complain like crazy!"

Yeah, go to their web site and you'll find that their e-mail link doesn't work and the meeting and announcement page hasn't been updated in about four years. The same with their minutes.

Money talks! And I wouldn't bet against threats being made and financial payoffs being awarded.

Remember the slimy Wilpon's were in bed with Bernie Madoff. The chuckleheads who run CB7 were small potatoes.

I don’t live in Community Board 7 but this project affects all New Yorker. This project might not be a bad idea, but it has so many loop holes that favor the developer. If you were at last night meeting, you would agree. Chuck Appellian is on someones payroll and this project will never get completed as planned. The developers are getting a sweet heart deal and the community is getting screwed

Maybe "follow the buck" Chuck Apelian passed on some of the bribe money he got to affect the new voting.

That shady flying carpet dealer needs to be investigated.

I think I'll put in a call to the feds like I've done before.
He needs to be removed from the board....and Barry Grodenchick won't do it.

This has got to go to the top!

A good tip to pass along is...brevity!
Prepare all public statements to run 1 minute.

If you can't say your piece in 60 seconds, you're talking too much.

An average TV commercial runs only 30 seconds.
They manage very well to get their message across.

CB7 is fast becoming known as the board of the rubber stamp!

I'll bet that these "yes" voters even carry their own ink pads.

Could some board member be making some money off of this? It sure quacks like a duck! So, what is it?

Forward your complaints to the FBI's anti corruption unit. They do take calls!

Deluging CB7 is a waste of time. The game is fixed.

Ooops--have I just insulted CB7? Are they "gonna" come after me now?

WTF, I don't need them. Neither do you.
Show some balls, and don't be afraid to piss on their shoes!

You are the boss!
They are supposed to be working for you.

Chucky two buck and gene I ate a hose kelty both changed their votes based on a baseless paper that was give by the city and developer they were gotten too as were other board members...mr goldfinger in my as- was lobbying board members like crazy,at 1point they had some board members lobbing others..from what I saw was mr Vallone standing up to vote no and cirvino voting no and the brave lady in green kim who stood her ground and beliefs and said no....otherwise it was the bag man chuck and the drunk kelty who are responsible for this lose....boycot and protest in front of chuckys printing business and hurt his business than that cash bonus he just got from wilpon will be used to float his toupee printing business

They are trustfundarians that don't care about people unless they are on some party hack's tweeder list - 'undocumented' immigrants, and the like, or do the fun stuff for the left that the Democratic Party can never do after Clinton - protest about 'stop and frisk' - drone attacks in Pakistan - the rise of the right in Greece.

When we remember that Quinn and Koch got their start as activists we can now understand the direction of Occupy - they are building a career path that makes them tomorrows Koch and Quinn.

They are not going to waste time on your problems.

I think the bottom line is that as long as any community cannot muster the backbone to do its on dirty work - clean up its own politics - they have to understand that they cannot rely on an adult to come in and clean it up for them.

Besides, why should anyone do it for you? That mess is really of your own making.

You want change Queens? Well get up off your asses and make it happen.

Or just keep whining to yourself in a corner. No one cares nor will anyone listen.

Did anyone notice, after the Buildings and Zoning Committee voted to approve this project. Many members of the committee including Chuck Apellian, went over to where the developers of this project were sitting and shook their hands. Something is not right when the Community Board is working for the developers and ignoring the pleas of our community. This project should never have been approved as written.

CB7 has already bent over backward.
Now it's your turn, neighbor!

OUCH! We just ran out of Vaseline, too.

The city should get a better deal and the community board should never have voted for this plan as proposed.
WAKE UP PEOPLE

It looks like 2 buck Chuck might be working with a developer on a Union Street Sanford Avenue project.

Would somebody please take action to investigate this shady mother f----r?

How long has Apelian been on board with developers?
Too damn f-----g long!

Bend
Over
Here
It
Comes
Again

go to irene hermann printing in whitestone and protest this crooked motherfu-ker..what a show last night anyone who thought this guy was clean were proven wrong last night...this guys got balls like a transvestite

Just wanted to reiterate the Crapper's sentiments from an earlier post:

"With all this crap going on it begs the question:

You know, I was just saying yesterday that Queens really doesn't have enough malls and entertainment complexes. I also said that the one thing that I really hate is that there is no place to shop and see a movie while attending a Mets game. And talk about waste, does Citifield really need so many parking spots where the unwashed masses tailgate and barbecue and drink beer that Wilpon can't sell them at ridiculously overinflated prices?

Overinflated ? The price has been lower and they still can't sell them ...under inflated ?

Chucky don't care ...as long as he gets his bag full of cash and vasoline to coat his head for his toupee he's good