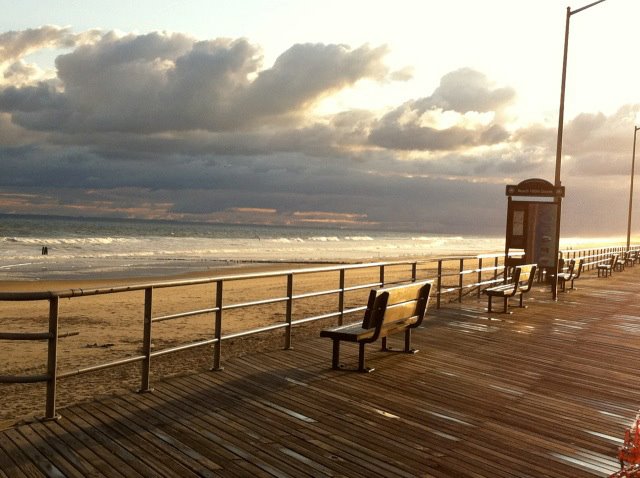 Someone gave me a heads up re: the NYS Assembly/Senate bill above. It is very disturbing.

Currently, the boardwalks on NYC's beaches are under the jurisdiction of the Parks Dept. Parks also maintains the public beaches by removing trash, staffing with lifeguards (though NYS law dictates how many lifeguards, how far apart lifeguard stations should be, etc). Parks can also allow temporary structures (i.e. removable handicapped access mats) volleyball courts, etc. on the beach. But the beach itself - the sand - is also under the jurisdiction of NYS DEC which ensures compliance with the Coastal Zone Management Act, among other things. Also, under Public Trust Doctrine, the shoreline and intertidal area is held, in trust, for the people, by the state. So in essence, there is a very nice checks & balances system that has been in place for years and that has worked very well. Brighton/Coney/the Rockaways/Orchard Beach/Midland Beach/Manhattan Beach, etc. are all governed by IDENTICAL guidelines.

All of a sudden, very, very, VERY quietly, the above piece of legislation has been proposed, by Assemblymembers Cymbrowitz & Brook-Krasny. It would take the beaches of Brighton & Coney Island - and ONLY those beaches, and give jurisdiction to the NYC Parks Dept, for 250 feet south of the Boardwalk. Basically, ALL OF THE BEACH, would now be turned over to the NYC Parks Dept. the most woefully underfunded city agency.

Interestingly, Manhattan Beach, which is within spitting distance of Brighton Beach, is also in Assemblyman Cymbrowitz's district. Yet he has NOT proposed a similar set up for Manhattan Beach. Why not?

This smacks of a special interest deal that will ultimately impact the lives of hundreds of thousands of people who live in a flood zone. The implications are enormous. And the fact that there has not been a single word in the media or anywhere else about this, is even more upsetting. Things that are done behind closed doors are usually kept hidden for a reason.

AGAIN, NOT A WORD OF THIS PROPOSAL HAS BEEN MADE PUBLIC. WHY???

Please call your NYS Assembly & Senate representatives and urge them to vote against these bills: A 07168 & S 04787.

Thanks,
Ida Sanoff
Posted by Queens Crapper at 12:35 AM

Not to worry. This piece of legislation won't make it out of Cybrowitz back pocket. Guaranteed.

This needs to be publicized. on the othehand let's call the Assembly person and request Manhattan Beach be added to the bill.......