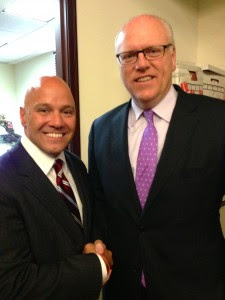 In an unexpected move, the Queens Democratic Party is likely to endorse attorney Paul Vallone for City Council on Monday, despite his family's fraught history with the party leadership, according to multiple sources in the borough. Mr. Vallone is running for the seat currently held by Queens Republican Councilman Daniel Halloran, who has declined to seek re-election because of a bribery scandal.

On paper, a more likely pick for the Queens Democrats might be former Empire State Development spokesman Austin Shafran, who has lined up widespread labor support in the race. The Vallone family has often displayed an independent streak in its dealings with the famously disciplined Queens Democratic Party, especially since the county organization did not endorse then City Council Speaker Peter Vallone Sr. during his 2001 mayoral run, despite his Queens residence.

Whether the endorsement for Mr. Vallone will actually happen Monday remains unclear: Labor unions are strongly behind Mr. Shafran's candidacy and could lobby Queens Democratic leader Rep. Joe Crowley to overturn the wishes of district leaders.

Some Queens sources spun the likely move by district leaders to back Paul Vallone as an effort by the Queens Democratic Party to throw a bone to the Vallone family. Peter Vallone Jr. is running for Queens borough president, but Queens Democrats are expected to go with another candidate, either Councilman Leroy Comrie or former Councilwoman Melinda Katz. Peter Vallone Sr. remains an influential lobbyist in city politics.

Actually, what's going on in northeast Queens is that the Dem leaders are refusing to carry Austin's petitions because he's incredibly unlikable. So they are holding their noses and advocating for Vallone, who they also don't like, but is slightly more palatable than Shafran. Fortunately, northeast Queens residents don't care much if you've been endorsed by County or a bunch of labor unions, which is why District 19 still has livable neighborhoods.
Posted by Queens Crapper at 12:44 AM

So maybe Honest Joe is behind his brother, too, eh?

Mutt and Jeff...semi bald and baldie!

Vote wisely!
Vote Avella or continue getting f----d up the ass without KY!

Yes I know that Paul isn't running for the beep spot.
But that spot is critical to the villainous Vallones.

Vote Graziano for councilman.
But be sure to vote for Avella for beep.

Otherwise the Vallones will have Queens in a classic pincher move.

It looks like about 1/4 of Paul Vallone's skull is missing (on the left-hand side of the picture).