All it takes is one jerk... 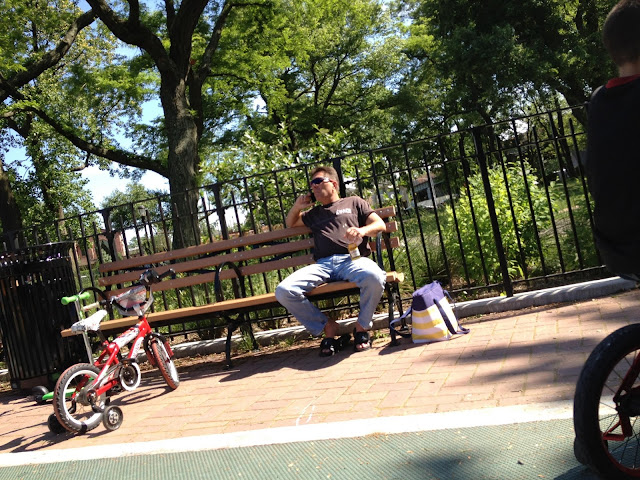 This last Monday on Memorial Day at Francis Lewis Park dozens of families with their children were enjoying of a beautiful day.

While this was going on this fifty something year old guy was drinking Coronas (Beer) right in the playground where his children, my grandson and those of other people were playing around, not content with the boozing display he was also smoking right outside the very gate to the playground next to where he was seating like all the attendants couldn’t smell the disgusting second hand smog.

What a shameful example to give to his children (because if he wasn’t accompanying any children which by the way I didn’t see while I was there that would be another violation of park usage), teaching them to drink in a public place while having a smoke where it’s also considered inappropriate. 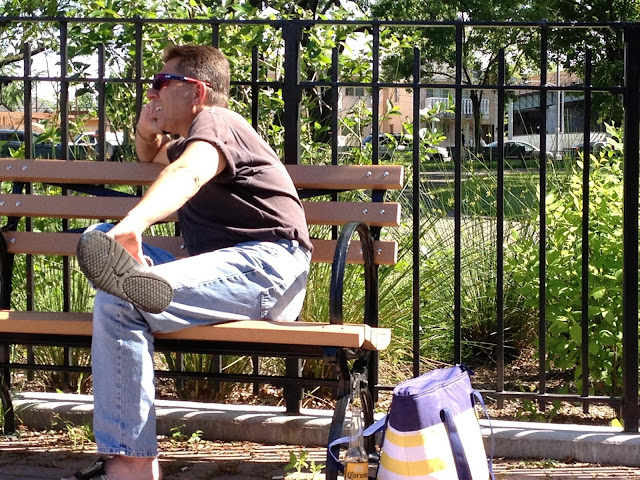 He was not only disrupting the enjoyment of that part of the day for many attendants to the playground but he also was breaking several laws. As usual there wasn’t any police or park employee presence in the park (or any other park in North Queens) to have him rightly fined for his imbecilic behavior.

Way to go boozer, what’s next? Drugs and public sex in the park where children play?

- Anonymous
Posted by Queens Crapper at 12:14 AM

People barbecue there too, which is also against park regulations. But the clueless and lazy parks staff do nothing about it!

In this case he looks to me like he's way beyond that.
He's in a category all by himself...a real GAVOON!

A call to 911 describing a rowdy male drinking in public would suffice. As far as seeing cops,forget it.After getting rid of 5000,the mayor is letting another 1200 go by attrition.Cameras are replacing cops! the city feels that the video will deter crime.The are adding thousands of cameras to the transit system.By the time they are operational,you'll see the NYPD transit Bureau manpower dwindle to about 500 cops.That's down from 4,500 from the old Transit police The current number is 1400. Ever see a cop in the subway outside Manhattan?

This is so much less disturbing than all the assholes littering and poisoning animals in Bowne Park!

Did anyone just ask him not to smoke around the kids?

Who cares about an adult having a Corona in a park on a holiday? As long as he disposes of the bottle properly.

It's not as if he was pissing in public - which you can often witness in Bowne Park - even when the facilities are open!

A call to 911 describing a rowdy male drinking in public would suffice. As far as seeing cops,forget it.After getting rid of 5000,the mayor is letting another 1200 go by attrition.Cameras are replacing cops! the city feels that the video will deter crime.

Then why is Bloomtard building a huge police academy in College Point? If what you say is true, the academy is a money-sucking boondoggle!!!


Well, to the male or female person who wrote that it's more important the poisoning of wildlife in Bowne Park than this I can only respond that if the welfare of an animal is more important than his/her children that's his/her prerrogative although it's wrong. This guy was breaking the law, making the moment difficult for everybody specially children and setting a bad example for everybody in a nice park in one of the best areas of Queens.
People in NYC spend more money and care more for dogs and cats than for children in this country and around the world, kissing a dog in the mouth after the little beast has pooped and licked its balls and/or ass it's not a positive view of a healthy society.

Wow, all someone needs to do is mention a concern for animals and the animal-haters come right out with the invective! I seriously doubt that more is spent on animals than children, even though people do seem to be taking better care and being more involved in their pets' welfare. Giving animals their due---long OVERdue! Our entire society revolves around children, which no one can deny, while animals are still--by law--only property, to be discarded on a whim and usually euthanized. As far as germs go, A child is more of a danger to me than any dog or cat. Catch up with the latest science.

If I was there I would've given him a piece of my mind and, if I didn't like his response, the brunt of my fist in his nose. What a scuzzz.

You wouldn't even need to report that anyone was drinking. It is clearly spelled out in all playgrounds that you must be there accompanying a child. 911 will take this very seriously.

--I don't remember anyone calling this park by its right name, someone must of read the sign---by the way--the location of the academy was chosen because the first was deeded too toxic, and was developed as the new fish market in the Bronx---------------