FAA agrees to form committee with residents about flight patterns 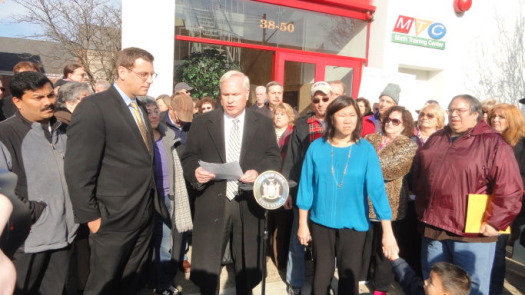 The Federal Aviation Administration has agreed to form a committee with northeast Queens elected officials and residents to review the decision-making process when approving new flight patterns in the area.

The move follows months of complaints from Bayside and Douglaston residents who were being tormented by excessive airplane noise stemming from a new flight pattern out of LaGuardia Airport.

“Agreeing to work with the community to review the new flight patterns and taking another look at the environmental assessment process in the step-by-step process we urged is a move in the right direction,” Meng said. “Although more still needs to be done, this is a positive move that can hopefully have an effect on the increased airplane noise that Queens residents have been forced to endure.”

The new flight pattern was implemented in February 2012 on a six-month trial basis. In December, the FAA announced that it would make the new routes permanent.
Posted by Queens Crapper at 3:55 AM

"Agreeing to work with the community" sounds to me more like:

"Thank you for your valuable input. We'll consider it (thump--into the waste basket) most carefully".

C'mon, boys and girls...will this committee have any real say in the matter?

The FAA will fly over the affected communities' wishes.

But continue to make noise--boys and girls--the airplanes, most certainly, will!

And take heart! We've got Grace Meng--the daughter of a convicted criminal--as one of our "champion" defenders.

LOL!
I think I'll retire to Bellevue for a little R&R.

One community's loss is another's gain!

Clearly our highly paid politicians don't want to do any real work.

Queens has 2 large airports and the FAA has decided to 'spread the wealth around' and alter flight paths. Our economic lives depend on our airports, these clowns want to help northeast Queens "activists" force the agency to have the planes take off over 'someone else's house'. Isn't this discrimination.

Come on Meng, Avella and Braunstein- go back to work on the jobs we pay you to do. Bah!

It sounds like our malcontent Ass-torian is off his meds again. That would account for the reappearance of this anti northeast BS.

Speaking of BS...might you be that jealous Mr. B.S.?

Move east young man, if you're unhappy with the west.

The fine folks at LaGuardia have DESTROYED the quality of life for everyone in Flushing (a Chinese community) by greatly increasing the noise level at a place where it was already intolerable before. Would they have done this to a wealthy white community? Never! This is environmental racism at its worst.

The plane noise became unbearable this month. Before the planes took off toward Shea stadium / corona park, now they going straight through residential area! So I guess the baseball game is more important than half a million people’s quality of life!

Having never had air traffic in my neighborhood of Brooklyn is now like a war zone, every freaking 30 seconds an airplane fly's by at so low altitudes.

Everyday, all day planes fly in a row, like clockwork, 30 seconds apart, the roar goes by, then fades then the next one.

Our local officials, senator Chuck Shummer is a first class schmuck has done nothing for us.....

All the taxpayers have to endure this torture because of the airlines, this is simply un acceptable. What would make the FAA think people that live in quiet expensive neighborhoods wouldnt mind hearing airplanes roar by every 30 seconds.??????????

simply awful, Queens, Brooklyn and the Bronx and even Staten Island now had to hear and see airtraffic on a daily basis.