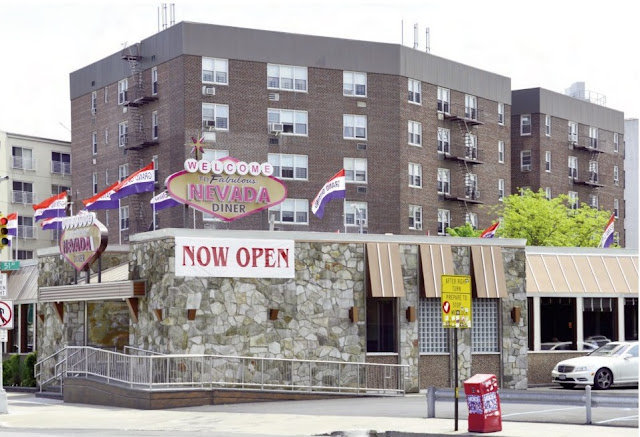 The Queens Gazette has an announcement about the opening of the Nevada Diner in Elmhurst, which has replaced the Pop Diner/Pop City Grill (which replaced the Sage Diner - site of an infamous 1986 shootout). There apparently is another Nevada Diner in Bloomfield, NJ, with the same theme and decor, so it probably is owned by the same entity. Early reviews aren't good, but then again, the Pop was pretty awful as well.
Posted by Queens Crapper at 12:35 AM

someone is dumb enough to open a diner in NYC in 2013?

there's no such thing as good diner food.
Who cares.

Food was never fresh at POP

That neighborhood is turning all Asian
They don't go to diners

Notice the apartment building behind the diner? People are too lazy to maintain the masonry cornices and trim. So the lazy and cheap way out is this too ubiquitous metal cladding. The old days used to have quality construction and maintenance.

Can't be worse that The Fame on Grand Ave....ugh...I have eaten there only 3 times in my 30 years in Maspeth...pancakes...spianch pie and an omlette...all three times I had a painful stomach ache...ALL of them are greasy spoons...salt...fat and dirt...not a healthy combo..

Who gives a shit?
One greasy spoon replaces another.