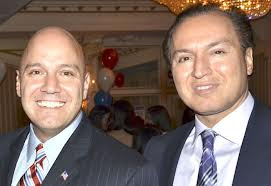 Peter Vallone (BP) is running with John Liu (Mayor). Meanwhile, Chrissy Voskerichian (19th Council District) is playing up her connections with John Liu. Will she be on a slate with Peter Vallone and John Liu in opposition to Paul Vallone's slate?

Will the Vallones end up cannibalizing each other? Strange bedfellows, these politics make!
Posted by Queens Crapper at 12:09 AM

The notorious Vallone Crime Family. How could anyone vote for these guys? They are so obviously smarmy!

So says the media that the Vallones "hate Quinn," but Peter received more in discretionary spending this term than any other Queens Council member except maybe Comrie.

One thing that is clearly visible with the Vallone family--politics has, is and will continue to be--the family business.

Each of the self serving siblings pushes his way to the table (or trough) seeking the best spot to feed off of the voters.

Why should brother versus brother surprise us?

From the first day that these suckling infants were birthed--like pups in a litter--each fought for the best teat to drink from.

Vote for either of these vampires and you resign your neighborhood to destruction.

I realize that "La Famiglia" is not going to like me for what I've just said.

So let's add a little more seasoning to my piquant comments. F--K YOU! I couldn't care less.

State Senator Tony Avella lambasted the city agencies during a press conference he set up with the homeowners in Astoria.

“The fact that this developer is being allowed to egregiously encroach onto and damage neighboring properties is a disgrace,” he said.

The senator was criticized in turn for stepping outside of his northeast district and into the territory of his borough president rival, Councilmember Peter Vallone Jr.

“It’s no surprise that while Councilmember Vallone was at City Hall representing his district, Senator Avella and his Senate staff were continuing his never-ending campaign for higher office,” said Andrew Moesel, a spokesperson for the Vallone campaign.

“Councilmember Vallone has attempted to help resolve the situation without holding needless press conferences only meant to draw more attention to a political candidacy,” Moesel said.

WHEN YOU READ BULLSHIT COVERAGE LIKE THIS YOU HAVE TO GIVE CREDIT TO THE QUEENS NEWSPAPERS FOR MAKING QUEENS THE #$%&*# PLACE IT HAS BECOME.

Vallone campaigned to overturn term limits along with Quinn.

Everything else is simply window dressing.

This exposes what the Vallones are like as nothing else. Watch this before they take it down. Someone should download it - this is a classic from Vallonia - and is a page in our future should they get into office.

Please don't use the term bedfellows when discussing Christine Quinn or Melinda Katz - the mental image is too distressing...

The egg head and the chipmunk.

Paulo Vallone...a cone head if I ever saw one.
Look at that shiny bullet dome and say otherwise.

Yeah, the idiot has to shave his pate everyday so he can achieve "the look". He looks like a doofus and a carbon-copy of Zippy the Pinhead.

Pete Jr. has a rather square head!

Yes sir--Valloney-baloney--anyway you slice it!

Speaking of delicatessen and deli counters--
I see that Marino's Market is supporting Vallone.
They've got his signs up in the window.

Maspeth Mom said...Politicians should compete with each other by doing the RIGHT thing for their constituents...instead they try to steal, lie, and cheat their way to the top. NYC politicians are consumed by the 7 deadly sins in the race to win!

Ragusa is the chipunk who is quietly supporting Vallone

They didn't call Mussolini
Benny the Bum" for nothing