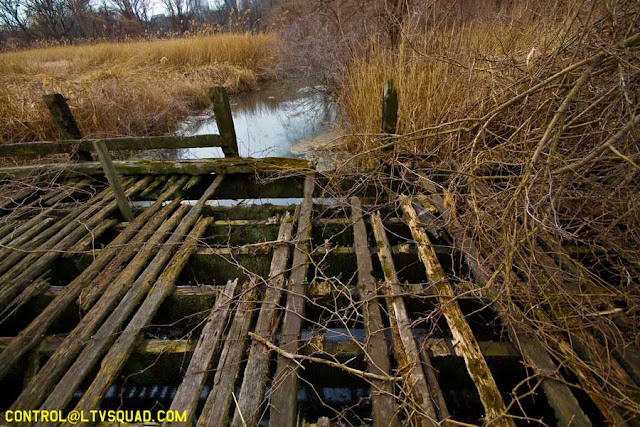 For 15+ years, the willow lake trail, and 55 acres of parkland right in the middle of Forest Hills, has been closed to the public. This parkland is located at the very southern end of Flushing Meadow Corona Park. It has been closed for so long, most people have forgotten it even exists - which is the only reason there hasn't been any substantial press about it in years. The only money spent on it has been for new gates that are never opened and designed exclusively to keep citizens out. Why? What are corrupt Queens politicians hiding?

We took it upon ourselves to take a look. What we found is a truly disturbing situation: a huge parcel of parkland that looks more like a toxic wasteland in the Jersey Meadowlands than a proper city park in NYC. Portions of the existing trail through this parkland are flooded out, and only passable via makeshift bridges constructed of pallets and sticks. One actual bridge was burned out in the late 90s and never repaired. This elevated level of neglect would never, ever be allowed to happen in Central Park. Money that was allegedly allocated to fix up this park appears to either have never been budgeted or disappeared into someone's pockets.

Read my report. I'm sure you'll find a very solid story here, potentially froth with potential scandal. The only thing it's missing are quotes from politicians and the parks department - frankly I was too disgusted by what I saw to want to bother contacting either and listen to more lies and excuses.

Joseph Anastasio
LTV Squad
Posted by Queens Crapper at 1:09 AM

What a great place to dump a body!

LOL!
That's where "granny" Shulman takes her emergency dumps after her lobbyist's meetings have concluded. PHEW...toxic turds floating towards you!

I love all the photos of shulman around the entrances to the trail over the years, with absolutely none taken of her actually on the trail, ever.

Only in Queens can you find such a huge parcel of parkland that has been abandoned, locked up and hidden away from the public.

They'll only fix it to put in more soccer fields for Illegals.

If that's how Queens parks are treated, imagine what a proposed park at the old Flushing Airport site would look like!

If that's how Queens parks are treated ...

no, its nature taking its course from neglect.

BUT IT IS HOW QUEENS RESIDENTS ARE TREATED, AND NO, ITS NOT REALLY BLOOMBERG'S FAULT. DO YOU REALLY THINK HALF THE CRAP CHARGED TO HIM WOULD HAVE HAPPENED IF YOUR ELECTED OFFICIALS DID NOT GIVE THE SIGNAL THAT THEY WOULD NOT FIGHT FOR YOU?

If you are an elected councilperson, boro president or mayor of this city, this neglect is your fault. You are elected to do a fucking job. Selling our parks to mall developers and overseas homophobes is not doing your job. Letting a park sit abandoned for over a decade is not doing your job.

If you or I didn't do our jobs, for a single day, we'd be fired.

There is more than enough blame to go around for this.

but wait.. didnt the city "sell" central park to the Central Park Conservancy.. and the High Line to Diane vonFurstenberg and Barry Diller?

the truth apparently doesnt fit the narrative of this site

And this sorry excuse for a trail was named after Pat Dolan. What irony, were the electeds punishing her?

Manhattan is the "Golden Isle". CP is in the tourist corridor and the front yard of the super rich living on 5th Ave. and CPW.

Who lives in the middle of nowhere Corona?
Do you get my drift now?

The article has a lot of truth in it but misses a few key points. The first is that the Flushing Meadows-Corona Park Conservancy regularly works with the Park Rangers to offer guided tours through Willow Lake, often with a ranger pointing out the various birds, wildlife, and flora that is in the park. We advertise in the local papers and send out press releases and emails announcing these tours. Just last week was a very nice bird walk that I went on, and we sponsored a two hour trail cleanup on the morning of the dedication of the Pat Dolan trail. We hope to work out a free canoe trip in the near future.

The second point is that Willow Lake is a protected wetlands under New York State law, largely through the efforts of my deceased neighbor Al Mauro, for whom the playground on the Kew Gardens side of the walkway is named. One of the problems facing us is exactly what type of public access should be allowed. One of the reasons that Willow Lake was shut in the first place was because it was being used as a dumping ground and a party location for teens. There were regular fires and constant litter. Protected wetlands can’t have people using it as a general place for mayhem if it is going to remain viable. Naturally there aren’t enough park police or rangers to keep Willow Lake protected. Simply opening the gates will lead to people picnicking, playing ball, and generally trashing the area. The birds and wildlife will be gone.

The Willow Lake area has recently undergone a large-scale replanting, with invasive species (mostly Phragmites) removed and native plants and trees planted. But it will take time for them to grow; a tree may grow in Brooklyn but it doesn’t do so overnight. Of course more resources would help. Hopefully as the native flora takes over the phragmites will be crowded out, but I won’t be holding my breath.

As for the flooding conditions, we are talking about fresh water lakes that are built on top of a 10,000 year old salt marsh. Meadow and Willow Lake, and indeed the Flushing River, were originally the course of the Hudson River until some glaciers changed it, and they exist in a former river valley. It’s very hard to avoid flooding unless the pathways are raised above ground level. Perhaps the author of the article has never left concrete behind, but anyone who walks through nature areas knows that sneakers may not be the correct choice in footwear. Some of us choose not to pave over wetlands for the benefit of people who don’t have boots.

When I grew up we had a forest where John Bowne High School now exists, and now we have so few natural areas left. Maybe the cost of the gates was exorbitant, but having them keep people out of Willow Lake is not necessarily a bad thing. Enter when there is a tour, and then leave the birds and wildlife alone. We’ve taken everywhere else that they can live.

How about this: Check out the 2 broken suspension cables that holds one of the orbital rings around the Unisphere. You can see them dangling from the lower ring on the side opposite the NYC building.

The FMCP Conservancy?
LOL!
Don't make me laugh! The "Conservancy's" interest is in mainly conserving their own jobs!