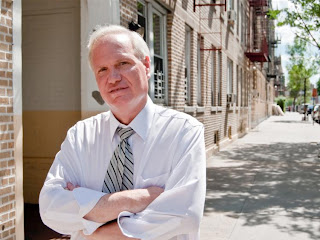 Thank you again for covering and publicizing our fight against Pali Realty, LLC and Yianni Konstantinidis.

Your advocacy and concern, and that of your readers, has meant a lot to my neighbors and I.


Senator Tony Avella who, ironically, represents Yianni Konstantinidis' district in Whitestone, was the only elected official in Queens who cared.

He visited our homes and wrote letters to the Board of Standards and Appeals, to the Department of Buildings and to the NYC Department of Investigation.

His efforts, and bills in the NY State Senate, will help to reform the Board of Standards and Appeals.

The process used by the Board of Standards and Appeals is an incredibly flawed one, and it allows developers and architects to manipulate public officials at every single turn. Gerald Caliendo, the project architect and co-chair of the Queens Community Board #1 Zoning and Variance committee, clearly knew about the exhaust vents at the rear of the building he was working on. He was present at the December 18, 2012 meeting.

And he decided to remain silent.

A trusted architect professional in the community consciously decided to stay silent, despite his professional obligation under the American Institute of Architects Code of Ethics not to cause harm to others.

Queens Community Board #1 was snookered and misled into believing that exhaust vents were merely "mechanical equipment". Then, after garnering Community Board approval, Pali Realty voided the original application and added details to the BSA copy to make it appear that nothing at all had been hidden.

In addition, the Department of Buildings approved the plans despite being well aware of the new Astoria Rezoning in May 2010. I rarely think New York City should be responsible for looking out for the well-being of its citizens, but in this case the city failed miserably and they, ultimately, should be held accountable for decimating the properties my neighbors have worked so hard to purchase.

Please find the BSA resolution, attached, which spells out the restrictions. It is the best we can hope for at this time.

My neighbors still have broken homes and a resolution does not appear to be on the horizon.

Despite my anger, frustration and hurt, thank you again for maintaining a website and blog that shines a bright light on this insanity.

Thank you Tony for taking on what the "community board from Hell", CB#!, wouldn't put its backs to!

Can you imagine Queens with Don Pietro "junior" Vallone as your political mafioso dynasty representative?

Is Tony Avella the only decent, hard-working politician in Queens? In NYC?

I never hear anything good about any of the others.

I really hope that Tony and Paul G. can defeat the Vallone Crime Family!

Good first step. Now is the time to take it to another level if you want to win and win convincingly.

Do everyone a favor in Astoria, and put this as a letter in all the weeklies and post on local blogs.

In the final sentence, reiterate your treatment by the local politicians and contrast that with the treatment of developers in Vallonia.

Solicit support from the community asking if anyone else has received similar treatment from the local political leadership or community board.

You need to give every signal that you intend to expand this to a broader political base.

This is the only way you can win.

They go nuts if their carefully cultivated image gets a dose of reality before the public.

Senator Avella has my vote.
If you guys vote for anyone else you have no one to blame but yourself.

Good!
I'm glad that some folks recognize La Famiglia Di Vallone as the crime family that they are.

Don Pietro senior is the godfather.

They are fearful of criticizing the Vallone dynasty.
I guess they think it's better to kiss Pete junior's ring instead of making noise.

Not until the electorate finds its "balls", will the situation change.

In Queens--particularly--voters are scared of their elected officials. it should be the other way around.

The voters hired them. They can fire them.