Classic case of "you scratch my back, I'll scratch yours" 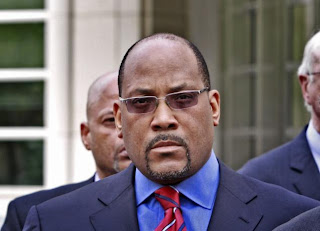 For elected officials, it’s part of the job: assisting constituents with problems.

When some people sought the help of Brooklyn state Sen. John Sampson, he allegedly demanded that they hire him as their lawyer.

The FBI is investigating whether the Sampson broke the law by seeking and receiving retainer fees from at least two businessmen who sought his assistance in dealing with the government, the Daily News has learned.

In both cases, the FBI taped the businessmen discussing their involvement with Sampson, sources say.

Sources familiar with the investigation say a focus of their inquiry is the “retainer fees” Sampson has demanded for the kind of work that other elected officials typically perform as part of their jobs.

Sampson was once one of Albany’s most powerful politicians, rising to the top of the Senate’s leadership in 2009 after Democrats became a majority in the chamber. He lost power two years later when Democrats lost their control of the Senate.

And like dozens of other state legislators, Sampson works on the side as an attorney. His Senate biography notes he represents clients in “real estate, criminal and election matters.”

Neither Sampson nor his lawyer, Zachary Carter, responded to written questions about the retainer fees.

One of those questioned by the FBI, sources say, is Brooklyn auto dealer Lilaahar (Sammy) Bical, owner of Kristal Auto Mall, one of the biggest Cadillac dealers on the East Coast.

Last year the FBI confronted Bical about Sampson’s role in helping him eliminate hurdles blocking Bical’s plan to buy a city-owned plot on Flatbush Ave. near the Belt Parkway.

Bical wanted the land to expand his dealership. But he faced opposition from some local politicians, including then-Sen. Carl Kruger (D-Brooklyn), who was trying to help developer Bruce Ratner build a shopping mall on the same property (Kruger was later indicted in an unrelated case and is now in prison).

Kristal Auto Mall on Kings Highway is owned by Sammy Bical, who allegedly paid Sen. John Sampson $10,000 for a an eventual sit-down meeting with the Bloomberg administration that led him to buy $4.2 million for a plot of land to expand the dealership.

A spokesman for the city Economic Development Corp., which oversaw the land sale, confirmed that Sampson “provided legal counsel to Mr. Bical at a certain point and did meet with EDC a few times.”

A city official, speaking on condition of anonymity, described the meetings as “an awkward situation because he’s not just a lawyer — he’s also a senator.”

And lawyering while politicking is currently legal.
Posted by Queens Crapper at 3:22 AM

How about Constantinople and Vallone?

It's more like,
"I'll bugger you then you can bugger me".
This way everyone gets their turn in the barrel.

Yes, your as gets hurt, but good gets done.

Correction:
Whoops, I don't believe I left out the second "S" in ass.
What an ass I am.