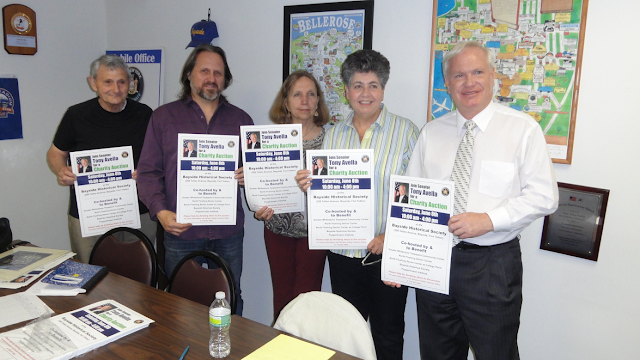 State Sen. Tony Avella, D-Bayside, is hosting an auction in Bayside on June 8 to raise money for five local nonprofits that could be forced to close this year due to a lack of city and state funding.

The auction will run from 10 a.m. to 4 p.m. at the Bayside Historical Society, which is located at 208 Totten Ave. in Fort Totten.

Funds raised during the event will be split evenly between the historical society, Poppenhusen Institute, Greater Whitestone Taxpayers Community Center and the North Flushing Senior Center’s sites in Flushing and College Point.

“We’re raising money for groups who have lost their discretionary funding and are in danger of closing,” Avella said. “We want to keep senior centers and historical societies open. There will be a huge outcry if they close and the amount to reinstate them will be expensive.”

The senator is calling on local residents to donate auction items that would be bid on to raise funds for the nonprofits.

There will be a $2 donation at the door on the day of the event.

Residents can drop off items to be auctioned at Avella’s office, located at 38-50 Bell Blvd., Suite C in Bayside, or at the offices of any of the five nonprofits.
Posted by Queens Crapper at 12:04 AM

You should ask your elected as why as a class they hold this man in such contempt.

Avella's public service career began over 20 years ago as an aide to New York City Council member Peter Vallone, Sr. He served as an aide to Mayors Ed Koch and David Dinkins, and as Chief of Staff to the late State Senator Leonard Stavisky and to State Senator Toby Stavisky.

Don't understand what the problem is here. Avella's not putting taxpayer dollars into these institutions. He's holding an auction. If you don't want to donate, then don't.

The problem is raising money for the North Flushing Senior Center which, research has shown, gets hundreds of thousands of dollars already from Toby Stavisky and other elected officials. Therefore, why is Tony raising additional money for that specific senior center and not others in his district that are suffering financially and may go under? I don't understand why you feel that it's OK to donate money to the North Flushing Senior Center when they still have thousands of dollars budgeted by Stavisky. What other senior center in Queens gets this?:


More importantly, it tells me that Avella's still connected to the Staviskys and that's disturbing to me and I'm sure it's not sitting well with other Queens Crap readers. To me, it looks like Tony's got his fingers stuck in Darkside's personal piggy bank. I'm talking about the North Flushing Senior Center and Money Laundering Headquarters!!! Where does the money actually go?

I was supporting Avella til I read that.

Once again, no one is forcing anyone to donate to the auction.

Let's see what Leroy Comrie is going to do for you folks since you hate Tony so much.

Interesting that the amount was changed (updated) since the link was posted in the comments section of the article entitled "Legislators and lobbyists 'connected at the hip'" on May 1st. It tells me that someone who read that comment made an attempt at damage control. The same link was used in both cases. So now this begs the question, what other Queens senior centers had such a high allotment and where did the money given to the North Flushing Senior Center go? It's a legitimate question and if Avella is gaining favor by his efforts, we're entitled to know the truth. Why does this point disturb you so much? Do you really think that Avella is an angel? Maybe he is compared to other Queens politicians but nobody should get a free pass.

When it comes to the BP race, being an angel compared to the other candidates is all that matters.

Not really interesting that the amount was updated or a case of damage control. The 15th of the month is when the reports are due, I believe.

Looks like someone is desperately trying to concoct a conspiracy theory where there isn't one. I'm voting for Tony. I don't care who the senior center is connected to. The people who attend their programs are benefiting.

You want a conspiracy theory? Look into the unholy Vallone-Crowley alliance. What promises were made for that? County endorsing a Vallone means someone sold their soul to the devil, and the people of the 19th will be the ones who end up suffering because of it.

Avella still gets my vote

Why doesn't the person who is fixated with North Flushing senior center just put their name in the things they post.

How many seniors use the north flushing senior centers?

Hey, I understand the concern about the NFSC. But how are you going to raise money for senior centers and exclude one of the major ones in your district?

Greater Whitestone Taxpayers Community Center is a senior center, genius. In fact, they were threatened by Dan Halloran that they would not receive funding if the leaders of GWTA spoke out against development projects in their area.

What elected officials are these institutions getting money from? The problem is that they AREN'T getting money, which is why the auction is being held. Governor Paterson ended the practice of member items years ago.

Really? Show me info on the College Point Center. What's the address and how many members does it have? The info on NFSC is pretty sketchy. I tried to find out how many members it has at both locations but couldn't. Why don't you enlighten us? Also, the amount of money the NFSC is disproportionate to the others in Queens. All I'm saying is that something appears to be fishy.

Address: 22-38 College Point Blvd at the Knights of Columbus Hall. As for membership, why don't you FOIL it and get back to us since it seems to bother you so much? Or even simpler, just call or visit them and give us a report? A simple Google search won't turn up membership info on most centers. Frank Padavan used to support the College Point location with state cash and hold events there, so it's not like Tony is the first SD-11 senator to help them out.

How much money do you think this auction will really bring in to these organizations anyway? It's a nice gesture, but won't come close to the amount received through state funding. I think you need to calm down and worry about actual corruption.

Bottom line:
You either vote for Avella or practice bending over.

Pain inhibitors will not be provided when the likes of Vallone fuck you up the ass!

In the end politics usually involves a choosing between two evils.

I agree...Tony is looking more and more like a guardian angel to me as each day passes. He got my family's donations and will get our votes.

Continue fencing with "The Crapper" with your sordid scenarios...thruthful, though they may be.

It gets you nothing.

Even if it's a crooked Stavisky operation...It's a small price to pay to throw some $$$$$ at the North Flushing Senior Center in the process.

Get over it, already!