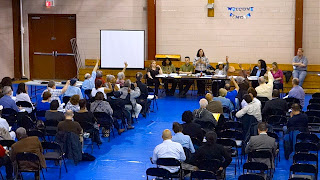 By a wide margin of 30-1 (plus 1 abstention), CB3 voted on Thursday night to disapprove the proposed "Willets West" mall / Willets Point development. The landslide vote endorsed the earlier recommendation, on Tuesday night, of several CB3 committees, and took place after a public hearing on the matter. Reasons for CB3's disapproval include the project's huge and unaddressed traffic congestion and related negative impacts, failure to prioritize housing and a school, overcrowding of subway and bus lines as a consequence of the project, and disregarding the Advisory Committee and Queens officials when selecting the plan and the developers. CB3 concluded: "The proposed project would change the character of the surrounding neighborhoods and impact the livelihoods of 250,000 residents and many small mom-and-pop businesses."

Likely aware of the committees' Tuesday recommendation to disapprove the project, no representative of developers Sterling Equities and Related Companies, or the city, bothered to attend the Thursday night public hearing.

Although CB7 voted last week to approve the same development project by a very slim margin of 22-18 (notoriously, after the CB7 committee had rejected it the week before by a vote of 7-2), the city's Uniform Land Use Review Procedure ("ULURP") entitles other affected community boards to also evaluate a land use application that "may significantly affect the welfare of the district or borough served by such board". CB3 has exercised that right, and decided to disapprove the application. So at the moment, the Willets West mall / Willets Point development has been approved by CB7 by a very slim margin, and rejected by CB3 almost unanimously. ULURP does not give any greater weight to any particular community board's recommendation – so both boards' recommendations must be equally considered by the next decision-makers.

Kind of funny how one community board bent over backward to ensure a "yes" outcome, while another boldly voted "no".
Posted by Queens Crapper at 3:08 AM

Where was 2 buck chuck and the firehouse kelty? Getting the hooker bitter man out of jail?

One board kicks ass (CB3) and the other boards bends over (CB7)--proving what?

Maybe CB7 really is--what many have been saying for years--as crooked as a winding country road--one of the shadiest boards in Queens.

I'm afraid it looks like that to me also

CB7 seems to have opted for over development at the expense of an antiquated infrastructure that can't keep pace with it.

Since Gene Kelty is the captain (chair) of the CB7 vessel--I have to ask him why this has been allowed to happen?

My question for Chuck Apelian (zoning vice chair) is
also why?

At the risk of incurring the enmity of both these men I choose to speak truth to power rather than cower under my bed!

"But securing printing contracts from developers depend on my yes votes".

P.S.
I just attended a public hearing at CB2 on Wednesday night.

There--chairman Conley allows attenders to question developers on their projects--in addition to submitting testimony during the time alloted for public speaking. That seems very fair to me.

Quite the contrary--chairman Kelty tends to verbally bully anyone, ESPECIALLY WOMEN (I've noticed), who speak out.

I understand the pressure and frustration that can build up--but if you can't hold your temper then you don't belong at community board meetings.

That goes for both sides--members and attenders.

The day the average citizen checks his or her right to speak freely in fear of community board committee chairmen will be a sad one indeed.

It's nice to know CB3 has integrity and balls. CB7 just has numbskulls.

Bitterman 95,000 a year to look like crap,kelty too drunk to understand,apelian 2 buck chuck looking for printing contracts and new hair pieces under the table...cb7 is the laughing stock of queens

Makes sense to put the soccer stadium on this land.

How do we affect change? Can we start a petition to impeach the entire CB7 board? I'm serious, please advise.

How do you get rid of people that are appointed to their positions?

Please don't tell me to vote differently - I vote, and everyone I know votes. We all love Tony Avella and plan to support Paul Graziano. But it will be difficult to defeat the Vallone crime family.

Can we shame CB7 out of it's current lineup with a blog similar to QueensCrap or CleanUpJamaica but focused solely on the activities and proclivities of CB7?

I fully agree that CB7 needs many replacements.

The chair has been "serving" too long and so has the vice chair. CB& has become a fetid breeding ground for corruption--just like mosquitos multiply rapidly in stagnant swamp water!

I'm not sure that petitions are the best way to accomplish this.
They often get "filed" in some government waste basket.

Oh--Gene and Chuck will surely hate me after this--my latest "faux pas".

Excuse me please. Where are my manners.

Have a nice day Chuck and Gene.

Back in the black said...

Jerry your still being too nice....chucky there's nothing in my hand for you and gene have a beer on me...and oh Marylyn ...get a face job on me!!!!!!!

LOL!
I always try to be mannerly, until somebody steps on my toes. Then I go for the jugular!
So far Chuck and Gene haven't high heeled my toes.

BUT WATCH OUT!
Many have learned what I'm capable of--
to their dismay!

I take my cues from English Bull Dogs! I don't let go!
I advise the ignorant lazy Queens electorate to follow suit!

Oops--
I left out FEARFUL in my description of the Queens electorate!