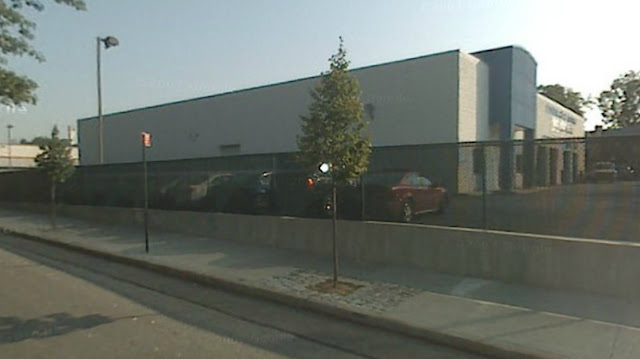 On Tuesday May 21, 2013 employees of the Star Nissan/Toyota Service Center located at 40-20 172 Street in Auburndale took a small hand saw to twenty two of twenty three city trees that are planted on the sidewalks surrounding the facility on 172nd Street, 42nd Avenue and Auburndale Lane. Branches, as many as ten per tree, were removed. Those branches that were too large for the saw to cut through were ripped from the tree after partial cuts taking the branch and up to three feet of tree bark and interior matter.

The trees were planted between 2003 and 2006 at the direction of the Mayor's Office to provide a barrier between the noxious business and the neighboring residential homes. The trees provided a visual barrier as they grew, a sound barrier from the power tool noise, a pollution absorption mechanism and added greatly to the aesthetics of the area.

From the beginning Star Nissan/Toyota ownership, management and/or employees opposed the planting of the trees, running over the first few the night they were planted. The Parks Department returned a few days later with a police escort to re-plant the trees. A few years later when the planting moved to Auburndale Lane, the first Parks Department crew was harassed so badly by the Star workers that they vacated the site and returned again with a police escort. The trees have prospered in the intervening years providing a full canopy on Auburndale Lane and a beautiful counterpoint to the bland industrial building on 172nd Street. That is until yesterday when, according to a Star Manager, the trees presented such a safety hazard with low hanging branches that they were cut so that any branch that extended from the tree up to six to eight feet above the ground was excised. He admittedly did not contact 311, the Parks Department or Mayor's Office for advice or permission.

A contingent of Parks Department employees were on site first thing this morning to inspect the damage and to ultimately serve the Star manager with $84,000 worth of fines ($4,000 for severe damage to each of 20 tress and $2,000 each for damage to the remaining two trees). The Parks Department will continue to monitor the trees as an initial analysis indicates that some will not survive the attack.

What a bunch of idiots. What the hell did they find so wrong with trees...

Star Nissan is a bunch of idiots. Not only do they rip people off, but screw the neighborhood too! They need to go.

Star is the worst - why does nearly every Toyota in the area bear it's emblem? The WORST sales people. $84K is not nearly enough.

Was it that the branches were too low and blocking the visibility of their business? I'm a bit confused.

Hang 'em all, from those very same trees!

Pish-ox!
Were those the same guys that Halloran screamed at?

The next few buyers of Nissans will make up for the fines.

Yes, they were the same guys Halloran screamed at. NO, there was nothing wrong with the trees, they weren't creating any obstruction that I noticed and I drive down that street almost daily. They certainly helped detract from the cold commercial building occupied by Nissan as they had begun to flourish and bloom beautifully. I agree $84K may not be nearly enough but I'm glad that the city took action. Thank you Rhea for taking on these challenges in our community. We need more people like you.

Truly disgusting. I don't think 84k is enough. The city needs to quadruple those fines, go back, and plant another batch of trees. If they hack off one limb, there should be 3 trees planted to replace it, all paid for by fines to Star.

I wish I knew this before I bought a car there last year (it was a used trade in). I was there just a few days ago for some warranty work that would have cost me an arm and a leg elsewhere). I wouldn't even know the shop was there if it wasn't for this fact. If it were surrounded by trees it would still stick out since it's one of few industrial buildings in a residential area.

As a customer, I'll be sure to send them a nastygram for what it's worth. I was a satisfied customer, though when you start fucking with a neighborhood for little reason, you can bet I won't be going back for another car years from now.

The springtime pollen from the trees probably means they have to rinse off cars that sit overnight, and we all know no one wants to do even the slightest bit more work these days. Lazy sods.

Yet another reason to buy a Ford or Chevy.

They probably didn't like the trees because the trees prevented them from parking their cars on the sidewalk, like pretty much every car dealership in Queens illegally does on a daily basis.

I know this block very well and can not figure out why the tress bother Star Nissan so much.

They don't park their cars on the street under the trees, nor do the trees infringe beyond their fenced property.

I'm glad they got a hefty fine and the city is staying on top of this.

I just wish all the illegal apts and buildings that are increasing in Auburndale were monitored as thoroughly. At the rate things are going, in 15 years Auburndale will be another Asian shanty town like Flushing just due west.

I'll never entertain the thought of ever buying a car from Star Nissan. Everyone should boycott it. I hope the city successfully collects from them.

After that fine, Star Nissan must be kicking itself in the head for doing this.

Parts of Auburndale are definitely shanty like, but nowhere near the unkept areas in west Flushing. Take a walk to places like Queensborough Hill (west of Main Street by Flushing Meadow). A once vibrant, well kept community is now an overdeveloped, mish mosh of un-kept houses with bars on every window. Very sad...

Uh, DUMMY...Auburndale is EAST not WEST of downtown Flushing.

Do you know how to read a map...let alone, read at all? We already know you can't speak English properly.

Auburndale's R 1-2A zoning prevents the overbuilding that abounds in downtown Flushing.

You've got a lot of anger stewing but, I suspect, are lazy and ineffective at whatever you undertake.

In short...ALL BLOW AND NO SHOW.

Go back to you beer!

Remember the Indian torture from the old 1940s westerns?

They tie one of the offender's feet to a bent tree and the other to a stake in the ground.
Then they see how long he can hold out.

Sounds like a damn good punishment for Star Nissan.

Sounds like an angry peter Koo staffer who doesn't know how to comprehend "just due West" as the turd land of downtown Flushing and Queensboro Hill.