The unholy Vallone-Crowley alliance has been forged 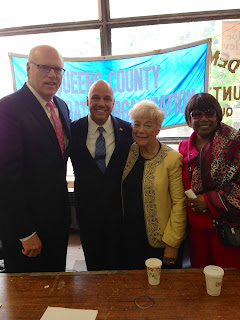 Amidst a groundswell of support from elected officials, as well as civic and community leaders, today Paul Vallone was nominated and officially endorsed by the Queens Democratic Party for 19th City Council District.

"Now more than ever is the time to restore integrity and trust to the 19th City Council seat. I am humbled and privileged to have the district-wide support of our elected officials, district leaders, as well as our community and civic leaders. It is an honor to stand with Congress Members Joseph Crowley and Grace Meng, State Senator Toby Ann Stavisky, Assembly Member Ed Braunstein and countless others,” said Vallone. "I continue to be proud of uniting Democrats in our district. As President of the Clinton Democratic Club, past president and founder of the Bayside Whitestone Lions Club and numerous other local organizations, this recognition proves that Northeast Queens wants and needs leadership that is active and committed to our community."

Vallone also recently received the endorsement of the Detectives Endowment Association (DEA) and today pledged to stand with the entire labor community if elected to the City Council.
“Make no mistake about it, I am a friend and an ally to working men and women and I will stand and work with all members of New York City’s labor community if I am fortunate enough to be elected to the City Council,” said Vallone.

Groundswell of support from civic and community leaders? Who exactly would that be? Let's take a look at where Paulie V's support comes from...

Good bye to that "strange bedfellow"--Halloran!

Now--the only way to restore integrity to the 19th council district is to elect Paul Graziano councilman.

His record stands as serving his community--
not abusing it--like others have.

The other Paul--VALLONE--has served developers--despite his continued denial of that fact.

The Vallone law firm serves over development!
They are heavy duty LOBBYISTS!

I offer as proof--the mess they've left in Astoria!

This latest political "69" number is about both these shady characters keeping their power and expanding it!


Paul's head looks like the Nutri Bullet that they advertise on TV....or the Coneheads have returned.

The only time you see Paul Vallone frequently attending our Broadway Flushing Homeowners Association meetings is when he's running for office.

I urge all my fellow BFHA members not to be taken in by this phony Valloney!

Vote for the other Paul--GRAZIANO!

Based upon my 30 years experience as a community leader-activist-- I say that you cannot trust this developers' lobbyist!

Take my advice, or prepare to take your lumps.

And--I don't give a damn if Vallone scowls at me for my direct words.

So "Virginia" Joe Crowley kisses Paul Vallone's ass.
What's in it for Joe that he doesn't already have?

Why support the son of a long established Italian political mobster family?

Oops--my bad!
It's PAUL VALLONE who is the developers' lobbyist.
This can get a little confusing.

With 2 "Pauls" running --be sure to double check who you're voting for.

Remember--
Graziano is the good guy. Vallone is the "black hat".

This keeps getting crappier by the day.

Neither "Paul" is the "Good Guy" You're just choosing the lesser of two evils. Such is American Democracy...

Can the Police Department take a "Group Mug Shot" instead of individual ones? Just wondering.

Graziano just doesn't carry the baggage that the Vallones have.

I cannot think that the Vallone's unique form of governing works outside of an area when elderly women dress in black, their grandsons drive souped up garbage trucks and wide cabin pickup trucks, and the entire community acts like extras in some wannbe Godfather film.

That is a sorry looking bunch of coconuts.

Paulie V. said:
Now more than ever is the time to restore integrity and trust to the 19th City Council seat

Wow, never thought I'd see integrity, trust, and Vallone in the same sentence...

"I cannot think that the Vallone's unique form of governing works outside of an area when elderly women dress in black, their grandsons drive souped up garbage trucks and wide cabin pickup trucks, and the entire community acts like extras in some wannbe Godfather film."

The bocce court in Bowne Park?

Mark Aarons and John Loftus wrote all about this alliance of Crowley, Valone, Cuomo, Montini, Margiotta and Pacelli. Knowning the cruel ending of Carthage, Vercingetorix, and Spartacus, any student of history appreciates Henry George is the only way to end these feudal casuists.

Inspector Beldar Conehead will investigate! Bocce? What happened to my tennis practise wall?

So how is Paul Graziano "evil"? Please expound.

He's the one with the track record of working for, not against, the community.

I think you're confusing him with the chrome domed Paul, who's a developers' lobbyist.
Enough said. Go and do your homework now.

These boobs wouldn't know the difference between Carthage and Canarsie!

Groan!
You've got great faith in the great unwashed populace.