Legislators and lobbyists "connected at the hip" 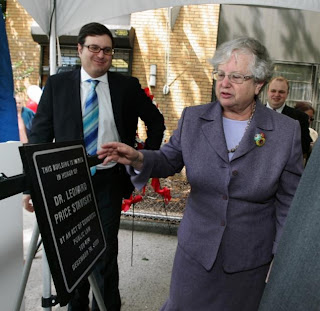 A growing trend in the state capital is raising alarms for ethics watchdogs: political consultants who work to elect lawmakers, then turn around and lobby them on behalf of private clients.

At least two dozen political consulting firms are also registered lobbyists with the state, according to an analysis done for the Daily News by the New York Public Interest Research Group.
Those 29 firms were paid a combined $5.1 million for election work in 2011 and 2012, the analysis shows.

When the campaigns were over, they descended on the Legislature as part of the $200 billion annual lobbying culture.

“It’s one more way that legislators and lobbyists are often connected at the hip,” said NYPIRG’s Bill Mahoney.

“Many of these lobbyists who are helping elected officials win these seats turn around then tell them how to vote on specific bills,” Mahoney said. “It’s an area they should at least look at.”

No one has played the dual role better than the Parkside Group, a consulting firm with close ties to Senate Democrats.

Parkside took in $2.77 million from campaigns the past two years and $1.8 million in lobbying fees last year alone.

One senator Parkside represents is Queens Democrat Toby Stavisky, the mother of Parkside partner Evan Stavisky and ranking minority member of the Senate Higher Education Committee. An ethics ruling allows Stavisky’s firm to lobby his mom, but not him personally.

“We are proud of the work we do for a variety of clients and we pride ourselves on upholding the highest standards of ethical conduct in all of our activities,” Evan Stavisky said.

Parkside is not alone. The Advance Group, the Mirram Group and Mercury Public Affairs are among other notable groups that play both roles.
Posted by Queens Crapper at 12:04 AM

Evan and Toby joined at the hip?
More like Siamese twins whose asses were separated from birth.

These two performing hippos are something to watch.

When are you going to make Toby a grandma?
I think Evan's "marriage" is his cover.

That family is married to politics.

Make a grandchild for your mamma.
She's been waiting for a very long time.

How come Evan is permitted to be a Queens district leader, when he lives in Rockland County?

Other interesting questions are: will the accounting of this money show all of it was determined necessary to spend by November 5th this year, and will past spending show a heightened need for "nutrition" around election days of each of the years of contract award?

Geez,
Evan has got bigger tits than his mom.
He needs a "D" cup "mansiere".

You couldn't pay me enough to go anywhere near Moby's hip...

Other interesting questions are: will the accounting of this money show all of it was determined necessary to spend by November 5th this year, and will past spending show a heightened need for "nutrition" around election days of each of the years of contract award?
_____________________________________________________________
There's an accounting of the funds? Because in my humble opinion, over $120,000/year for a senior center with about 50-75 members (who pay dues and pay for meals and trips) is a lot to explain! Also, the North Flushing Senior Center gets "donations" from other elected officials. How can members of the general public peek into the financials of this organization? Are the Staviskys, who seem to benefit from these funds, accountable to anyone?

Other "allocations" to the North Flushing Senior Center:

AND Stavisky allocated additional funds to the center over the last few years. Is she getting ready to retire? Hmmmmm...........

The "allocations" to this senior center is suspicious and disturbing. It's pretty easy to find other funds to the North Flushing Senior Center such as:

The Senate proposes to restore the following:

* Expanded In-home Services for the Elderly Program, $2,000,000 The Senate proposes to reduce as follows:

nity Services for the Elderly, and Supplemental Nutrition Assistance Program (SNAP), ($14,707,000); and

The Senate proposes additional funding for the following:

I feel bad for the seniors who are members of that senior center. I'm sure most of them are unaware that this center is an elected official's piggy bank.

Don't expect to see this in any of the Queens weaklies such as Schneps's Courier. Maybe the Daily News is still monitoring this blogsite? Even better---the FBI!!!

What hypocrisy!!! I just found this article in the Times Ledger from 2011. Note the quotes from Toby Stavisky:

"State Sen. Toby Stavisky (D-Whitestone) held up thousands of petitions that were gathered against the planned closures.


With many senior centers forced to close due to budgetary cuts, why is one (North Flushing Senior Center) profiting?

Note to Toby---
When do you plan to share the wealth?

Yeah right! And who's enforcing this ruling? I guess Evan's not allowed to talk to his ma. What does this measure on the stink meter?

Forget about Halloran.
He announced that he's not running.

I guess he'll be too busy running from the law.

C'mon you eager beaver FBI guys 'n gals...
some knowledgeable soul has given you plenty of good leads here to investigate.

FOLLOW THEM UP!
It's an opportunity for your advancement within the bureau and a higher pay grade.

Alright our friend, calm down.

All we need to do is take a look at mom and sonny.

Now think about the power that the people of Queens gave them.

Speaks volumes about Queens and its residents, doesn't it?

Ever see Toby's shoes? Most uncomfortable for a perp walk! She's NEVER in fashion but I can't wait to see her in an orange jumpsuit...behind bars!!!

Toby looks like she's tying to conceal a fart she's just expelled, and Evan is laughing at the futility of her attempting to do so.

It was the Stavisky's Jewish voters that gave them that power, my man.

They're almost all gone now...save a hand full at Mitchell Linden and the Bay Terrace contingent.

Toby will be the last of the dynasty to hold public office.

Evan is smarter. With his bitchy personality he could never become king.

Better to be a kingmaker...eh, Evan?
No term limit worries there.

It looks like somebody walked all over her face wearing heavy Oxford brogues.

The one time I was allowed in the district office...somebody smelled like they needed a bath.