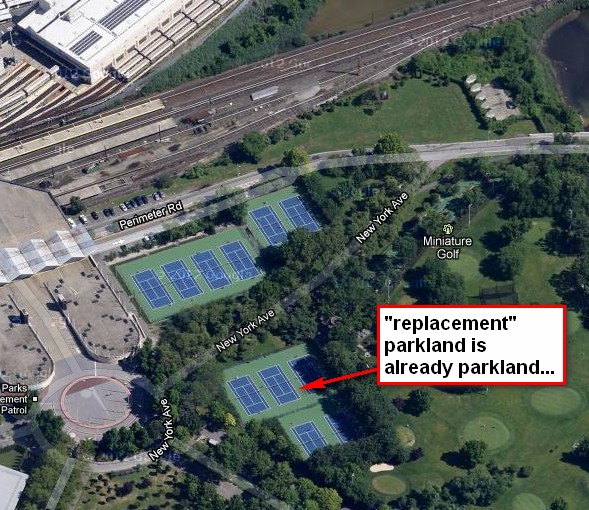 The U.S. Tennis Association, which owns and operates the U.S. Open, announced Tuesday morning it has reached an agreement with the city that will replace a sliver of public parkland in Flushing Meadows Corona Park that it needs to complete its expansion and also increase the active space available there.

The agreement ends a local fight over a 0.68-acre piece of parkland that the Tennis Association needed to acquire as part of a $500 million expansion for its 42-acre Flushing, Queens, tennis complex.
The community has been pushing the tennis association to replace the parkland, while the city had been open to accepting a financial commitment from the tennis group to make improvements to the park, rather than exchange land. One source said the land-swap agreement means there will be no USTA funding of improvements, but another said the matter is still to be negotiated.

The new agreement with the city will give 1.56 acres of parkland back to the community in return for 0.68 acres of parkland it needs. The replacement space will be located east of David Dinkins Circle and includes three-quarters of an acre of "passive open space" and nearly one acre of active space that contains five tennis courts. Those two parcels of land were added to the National Tennis Center's lease in 1993 and will be returned to the city. The Tennis Association would still be responsible for maintaining and repairing the tennis courts and would use those courts only for major tennis events.

So, they are proposing to privatize parkland by "giving back" parkland they already privatized (but still will be able to use whenever they want to). Well, that sounds like such a great deal for parkgoers! Let's hear from Holly...

"We are pleased that the USTA and the city have shifted their positions on replacement parkland," said Holly Leicht, executive director of New Yorkers for Parks. "This may seem like a small amount of acreage, but it is vital to close the door on this and future attempts to privatize parkland without replacing what is lost to the public."

Once again, New Yorkers for Parks is a fake park advocacy group that is joined at the hip with the Bloomberg Administration and a "partner" of the NYC Parks Department. I'm sure local activists will take a different stance...

"It's a good first step," said Will Sweeney, co-founder of the Jackson Heights Green Alliance and member of the Fairness Coalition of Queens. "We felt this was the most important thing the USTA had to do, mostly for precedent purposes."

So Sweeney and his fake coalition think that setting a precedent of replacing parkland with other parkland is good?

Heaven protect Queens from our so-called "park defenders."
Posted by Queens Crapper at 12:17 AM

The only this acessable for public use back there are some ancient 1964 transformer vaults and a road
Will tennis courts and miniature golf be converted back into public park space or handed over to another private vender charging $90hr for snooty rich weirdos & yuppies to hit balls on this "public park space" ?

Can anybody s'plain me WTF is "David Dinkins Circle" and what does Dinkins have do with Flushing Meadow Corona Park ?
That area by the tile mosaic's transportation ramp, police office and bathrooms is called "Main Mall"

Most of our borough's organizations are fake!
They're too tied to borough hall.

Why should we be surprised that these fake park "advocates" are any different?

They've been bought off and co-opted!

the replacement parkland includes BOTH lots on either side of "New York Ave".. and is equal to twice as much land as the USTA is annexing for the new stadium..

IM not sure the issue here.. were the complainers asking for USTA to buy up a 1 acre plot of commercial land somewhere else to turn into park land? with maintenance at NYC expense? .. this is a good compromise. The USTA took over the acreage in 1993 and now they return it. It consolidates USTA on one lot and gives some open space back to FMCP. Useful space around an entrance to the park.

1) The USTA doesn't need any land for this project. It can build in its existing footprint, according to their EIS. So why are we even entertaining this nonsense? Only because it's in FMCP and not in Central Park.
2) What they are "giving back" is not "twice the parkland they are taking," because they are not including the "teardrop" area in their .68 acre calculation, which contains most of the trees they plan to destroy. They claim they are already entitled to that land under the old contract.
3) Those tennis courts they are ceding are already publicly accessible, so they are not "giving some open space back to the park."
4) Last time they took parkland, they built Powell's Cove Park.

If you are proposing to alienate parkland, you at least offer to replace it. Not insult everyone's intelligence.

Anyway, since this article was published, a host of electeds and community groups have criticized the move that they praised yesterday.

In the case of David Dinkins Circle, he was a mediocre one term mayor but he was the first black on the job and he kept the USTA in NYC. And yes, the namesake is still alive.

This is a land grab...pure and simple.

I wish this were the old west, where they hanged horse thieves!

CB#7 will go along with this, just like all of the other land grabs they put their stamp on.

It's way past time to replace this board!
It is one of the most actively crooked boards in the city.

Chuck & Gene have got to go, just for starters!

Are you suggesting that we hang the whole board?

Can you imagine a clothes line full of these crooked CB#7 members dangling in the sunset?

Clint Eastwood would love it!

SWEENEY IS A PIECE OF SHIT.

CHECK OUT HOW MUCH MONEY HE HAS BEEN MAKING ON OTHER PROJECTS BY STERLING AND MLS.......