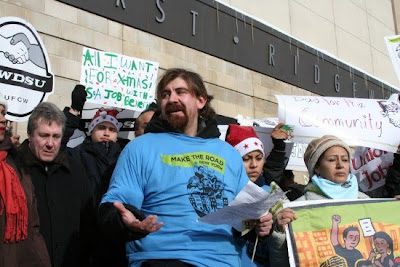 As shoppers scurried to snatch up last minute gifts inside the Queens Center Mall, local elected officials and community organizations painted the shopping destination's landlord, Macerich, as the latest Grinch in the ongoing fight for living wages -- just days after the city council rejected a Kingsbridge Armory plan that had no living wage requirement.

Standing on a snowy corner of Queens Boulevard, Santa symbolically held gift-wrapped boxes marked "living wages." A menacing green Dr. Seuss character represented the mall owner. Activists from Make the Road New York, a citywide organization focusing on economic justice, demanded that the landlord place a living wage clause in its leases -- which would require stores to pay $10/hour with benefits, or $11.50 without.

Yesterday the group released its Dickensian report, "Queens Center Mall a Poverty Wage Center in Elmhurst," illustrating the travails of low-income New Yorkers and arguing that the millions of dollars in tax abatements received by Macerich should translate into benefits for its employees, including a living wage and the right to unionize. They also beseeched the owner to create community space.

Like many major commercial property owners in New York, Macerich saved $48 million in taxes through the Industrial and Commercial Abatement Program between 2004 and 2009. Make the Road New York predicted that by 2018 those abatements will total $129 million.

Andrew Friedman, the group's co-executive director, said the city shouldn't dole out abatements without requiring a living wage as some municipalities across the nation do.
Posted by Queens Crapper at 12:13 AM

7.50 p/hr is peanuts to live on. even 14.00 p/hr sucks but it helps working families. there should be a living wage clause for all large scale constructions in nyc especially if the owner is getting tax abatement. imagine living of off $7.50 p/hr. even with a 2 income household its borderline poverty.

Just so ya know, the handouts the govt gives to 35 hr work week types come from, in large part, the small business owners workin 85 hrs a week, and risking life savings on their business.

"imagine living of off $7.50 p/hr. even with a 2 income household its borderline poverty."

First off, if u dont like he salary, dont take the job. Stop bein silly.

From what I have seen, with all existing evidence, there are ways in which a person can avoid having a welfare-needin family.

So, before you go askin for handouts - buy a condom, send the bf to the curb, or shut the fark up.

The problem with this is that the profit margin in retail is a razor-thin 6% even with below-poverty level wages.

I cannot imagine how stores that make that in normal times can significantly boost labor costs--all while customers are turning to the internet for sales or boycotting stores entirely.

Put a living wage clause in the leases, watch what happens to the vacancy rate on the Mall - anyone want an under/over on 50%?

This living wage argument for retail workers is just stupid. Most of these workers are part-timer kids in school. The tax abatement is irrelevant to this. That mall was a disgusting dump before Macerich put in hundreds of millions to expand and renovate it and turn it into something nice. Put in a living wage and the businesses will flee and the place will turn into a dump again.

Hey - where were the POLS and Unions that prevented Walmart from occuping the new Mall near Sears? That mall is so behind schedule - there would have been merchandise at Walmarts that we need vs the $25 T shirts for 19 year olds that pervade the Queens Mall? Walmart would have easily paid much more than minimum in this area because the returns are so great. But no, we have Kohls, Century 21 and Costco moving in - more of the same except for Costco. The Mall stores should raise wages or add benefits collectively to aid these workers.

Back in the '70s, while in college, I worked in Bloomies part-time (30 hours/week). There were MANY people that lived very nicely on their Bloomies salary. Why does retail have to be a shit jobs now? Why has everything has become a minimum-wage (or less)shit job in NYC? Because there are too many people here willing to do the work. I have family in medical billing (not exactly an unskilled shit job, in my estimation) making $9.00/hour with no benefits! And they say there are always women that will do the job the job for less. This is why kids are still living at home at 25. How do you move at when you make $360/week before taxes with no bennies??????????

"Don't like the wages don't take it". Yea that's realistic...

Why does retail have to be a shit jobs now? Why has everything has become a minimum-wage (or less)shit job in NYC? Because there are too many people here willing to do the work.

Anonymous: So, before you go askin for handouts - buy a condom, send the bf to the curb, or shut the fark up.

You must be a very wealthy A hole. Do you live on 7.50 an hour? Probably not. A lot of people made a living wage until the convience of the recession hit and people lost almost everything. You can't even pay utility bills or rent on $7.50 an hour by yourself. Excuse me if people have children sometimes crap happens i'm sure with your attitude your also pro life you sound it. People with your attitude make me sick because it's people like you who are usually clueless and wouldn't know the first thing about living in poverty.

You crapmaster (AKA-Anonymous), are the very evil you yourself fight.

"You must be a very wealthy A hole"

Yes, I wore a condom, had a single child when my wife and I could afford one. I worked 80+ hrs per week, and started a successful business. If I was makin $7.50/hr my wife and probably wouldnt have had a child. Because, and I know it is difficult for the underclass to understand, WE COULDNT AFFORD TO SUPPORT A CHILD!!

The lobe missing my friend is from your brain. I too come from a hard working class family and my child was planned as well. My point was and being your so close minded and didn't get it. There is this thing called circumstance. And one day you can be on top of the world and the next day not have a pot to piss in. Doesn't make you have a bad work ethic or missing part of your brain it's just bad luck. And today a lot of hard working honest people are hurting thru no fault of their own. I'll repeat what I said in my first post people like you make me sick.

I am sorry I make you sick. Take an antacid and you'll feel better. But please, after you do, tell your wage slaves to stop slurpin their pop, pick up their mop, bc the Burger King floors get really grimy after a snowstorm. I guess I am close minded. In my narrow mind, you dont go out and waste your time at dopey protests - you work OT, find a second job and provide for your family. When you stand behind a cash register and say, "Can I take yo odor"? to people, you dont deserve a 'living wage' - you should be bustin your ass a lot more than that. Just because there are genetic slobs out there doesnt mean they have to be subsidized.

Couldn't agree with you more. I've had about 50 comments unnapproved/deleted because...well you'd have to ask the anti freedom of speech webmaster.

I find that hard to believe. I have had differing and sometimes controversial opinions, but never have had my posts deleted. Maybe you are not posting on topic comments.

If you post off-topic comments, resort to name calling of other commenters to get your point across or act like a troll, you are getting your comments deleted. Don't like it? Go post your drivel on other blogs.

To my close minded friend.
They are speaking regarding mall not just the
fast food places. There are some upscale
stores there. And what's funny is I don't
hear you complainig about the 48 million
the mall saved in tax breaks. I'm figuring
that should really make u uptight.