Times makes Nazli out to be a saint 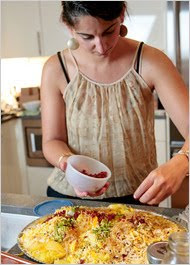 AS the head of Mayor Michael R. Bloomberg’s Community Affairs unit, Nazli Parvizi says her job requires her to “be a good listener who gets yelled at a lot.” Criticism comes with the $192,198-a-year commissionership.

But no other commissioner would have to face the rebuke one critic in Queens leveled at her dismissively: “Remember, she’s a caterer.”

Go ahead, make her day. Ms. Parvizi, 32, was a founder of Night Kitchen, a catering service, in 2001, and majored in food anthropology at Barnard College. Politics is her vocation, but food her passion. She scours the city on bicycle for restaurants to use for events or to recommend to a colleague, even the mayor.

After running the mayor’s volunteer center, Ms. Parvizi was named in 2007 to run the Community Affairs unit, which links City Hall and New York’s communities.

Ok, and she became a city commissioner with what qualifications exactly? The NY Times didn't delve into that. The rest of the article goes on about how she uses food to create a dialogue with the communities she serves (They even go so far as to print her receipes). Which makes me wonder what she was dishing out when she banned a Brooklyn community board leader from a function because he had the audacity to think he could ask the mayor an unscripted question, sent a nasty letter to a Middle Village civic group in response to a sign displayed at a protest they held and dispatched one of her minions to tell representatives of a neighboring community not to expect any more help after they failed to defend the mayor's right to shit on that other group. Why not bring that stuff up, Harvey? Especially since I directed the victims to you and know they contacted you about their experiences with her...

It's a sad world we live in when the paper of record tries to pass this tripe off as news. And we have to look forward to 4 more years of the Times taking a bowl of Bloombergian pits and turning them into cherries. But that's ok, it's coverage like this that will keep this blog relevant and necessary for a long time.
Posted by Queens Crapper at 12:05 AM

Looks her rice decorated with all sorts of edible flower looking things on it again.

I must say she's a hell of a good cook !
I was at a party for my friend of mine Sasha in Glen Cove (her parents are doctors)
They must have had a 15 foot table off all kinds of rice with chicken and kabob at the end
Ba-ba-loosh, Baghi Polow, cracki rice, dill rice, beans, Zatzeekee, mountain of flat bread (spelling) it was awesome stuff.
You certainly wont fine it on Roosevelt ave that's for sure.

What she works for that asshole mayor when she has a real talent I have no idea.

She has talent kissing the King's ASS. She is a whore for money. No wonder the New York Times stock will be less than their Sunday Edition. TeeHeeHee

Nowhere in this adoring piece of kiss-ass hagiography is there any mention of this caterer's ACCOMPLISHMENTS.

$192,000 under her pillow per year, and not a single accomplishment worth mentioning?

And, no real praise for her cooking.

The forces of employment percentages for gender, sexual preference and race groups are very strong in government, as in related professions/industries (academia, law, etc). And she's from a historical foe, Iran. Bonus points.

Another thought. Araton wrote for the NYTimes sport section for some time up until the beginning of July. Now he's back after 6 months and writes under the Food and Dinning section? May be looking for an inside hookup with such a puff piece. As with most NYTimes writers, journalistic integrity is not on the menu.

But I will give the young Ms. Parvizi one prop. She does understands how it's hard for your constituents to yell at you when they have their mouths full of their favorite foods. Pacifying the mad beast.

Joe:
I've always been turned off to buffets full of different rice dishes. So boring and uncreative as well as tasteless.

Anonymous said...
This comment has been removed by the author.
Thursday, December 24, 2009

But that's ok, it's coverage like this that will keep this blog relevant and necessary for a long time.

But what about the Trib?

Klink: Iran has not been a 'historical' foe of the US - unless you are a 30 something that falls before Schopenheuer's

Before the 80s they were a staunch US ally.

Today, article after article outlines that a vast segment of their population is simply wild about US and American culture. Iranians, unlike Turks or Arabs, consider themselves directly linked to Europe.

Come now MIles, what's 30 years among friends?
The only significant Iranian-US relations predate some 60 years to WWII. American political history being the measure of relativity in my context.

Persian culture on the other hand... We see some agreement.

Merry Christmas to you sir.

"Sometimes a cigar is just a cigar"


Sorry, I couldn't help myself, Miles.

“A woman is only a woman, but a good cigar is a smoke.”

No cigar anywhere is safe from me

Got to love Crap.

This place is so educational!

"What this country needs is a good 5-cent cigar."
-Thomas Marshall, Vice President as said in the Senate in 1919

A woman is an occasional pleasure but a cigar is always a smoke.”

You Know Who said...

Getting a bit off topic with "Nazli the Nazi" and "Boss Tweed and his 5 Cent Segas" and put in a word about Iran and US:

The only way old friends can get back on track is for them to communicate. They make speak different words, but their languages have a common root.

That part of the world would be stable only when the two resume dialogue. I think there would be some pleasant surprises for both when that happens.

How would you suggest that happen? The CAU people have been invited numerous times to "bury the hatchet" with the community groups they've offended and instead of "breaking bread" as it suggested Nazli does every chance she can, she has rebuffed these attempts.

The problem is that the city will always find SOMEONE in the community who will sing their song.

Someone needs to get a fat grant, or a benefactor who is willing to fund a real community preservation effort.

Part of the problem is that no one can formulate EXACTLY what is wrong. Its sort of like those that can do something aint going to do a thing, and those who cant are too passive and accepting.

But everyone is in agreement - SOMETHING has to be done cause the current system is not working.