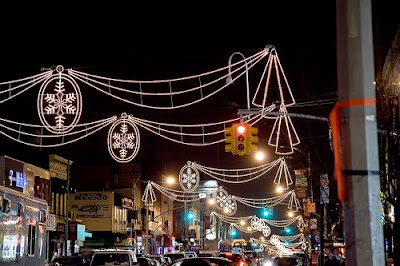 From the Newtown Pentacle:

The annual occurrence of Christmas adorns the tired streets of ice struck Astoria with electrical garlands of questionable taste, speakers blare seasonally appropriate melodies from their lamp post perches, and vast hordes of shoppers seek to acquire, transport, and then dispense a bounty of trade goods. Such peculiar behavior garners no small amount of comment from the large middle eastern and southeast Asian communities within the ancient village, who are not willing to miss out on what seems to be a lot of fun, and they eventually join in and play along with the odd custom.

To appreciate ChrismAstoria, however, one must visit its fertile climes at night.

Ever conscious of social status and standing, given to vulgar displays of tasteless consumption and wild imaginings on the subject of real estate development, the population of Astoria does not disappoint when competing with neighbors for the attentions of holiday tourists. Even the police cameras and red light robotics clustered around the corner of Broadway and Steinway Street look positively resplendent when illuminated by such redolent regalia.

They should kiss my ass in Macy's window. There is a lot to complain about in Astoria today, but people volunteering their time and money to dress things up is not among them.

Those garlands of lights went up even 40 plus years ago in my youth, perhaps a bit less aggressively, but well-appreciated during the pitch-black days of winter.

I think if you really want to know what is Astoria is like - and why a lot of people think its future is rather grim (a feeling that bears relationship to your time in the community and distance from the real estate industry), you need to hear from the people themselves.

It you can keep your lunch down, a good place to start is the small clique that calls themselves astrorians.com.

Now for the really important things and threads that gets lots of traffic and comment:

By contrast, tedious stuff like supporting your community or anything that might cast a shadow on liquidation of your little 100 x 25 ft lot, we have the following:

2. Meeting on zoning the community for more development

Pretty sad, eh? A few decades ago this used to be a great place.

Leading the community chat board with a fixed topic on bed bugs is a nice way to introduce the community, doncha think?

At 264 posts and 28640 views it must the that community's equivalent to clubhopping in Soho.