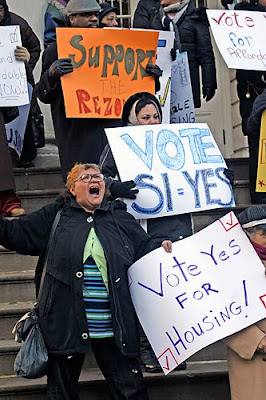 The City Council strongly backed a plan to encourage residential development inside the now mostly commercial “Broadway Triangle” on Monday, but the battle isn’t over as a coalition of 40 North Brooklyn community groups announced an expansion of its earlier lawsuit.

Councilmembers voted 38-10 favor of the rezoning, with the majority believing that the plan’s promise of affordable housing — at least 850 of 1,851 apartments would be set aside at below-market rates — outweigh the ugliness that characterized the plan’s creation, which featured a no-bid city contract awarded to two politically connected groups allied with the borough’s Democratic Party boss.

The Council vote didn’t surprise the dissenters in the Broadway Triangle Community Coalition, but the group is not going down without a fight. This morning, lawyers will file an amended lawsuit in state Supreme Court against Mayor Bloomberg and the city’s Department of Housing Preservation and Development that will be tacked onto the earlier suit filed in September.

The suit contends that a politically corrupt process cut out dozens of community groups from partaking in developing the triangle’s 31 acres of industrial land into a mixed-income community, and that the city acted unethically when it granted development rights to two politically connected groups — the United Jewish Organizations of Williamsburg and Ridgewood Bushwick Senior Citizen Council, both tied to Assemblyman Vito Lopez (D-Bushwick).

City officials maintain that the arrangement was legitimate because both groups submitted proper applications. And on Monday, several councilmembers agreed.

“This is not an Atlantic Yards project that circumvented [the process],” Councilman David Yassky (D-Brooklyn Heights) said at what would be his final hearing in office. The Triangle is in his district and, as such, he played a large role in seeing it get through the Council.

“We’re going to have 800 affordable apartments. We went through the process and had public input.”

1) The Atlantic Yards scheme did "circumvent the process" on many levels.
2) Both AY and the Broadway Triangle rely on eminent domain abuse, something not mentioned in any of the articles I have read thus far regarding this rezoning vote.
3) David Yassky is an asshole.
Posted by Queens Crapper at 5:50 AM

What is "tweeding"? A definition, please. Thanks.

ya see, if it were in Queens

The papers would go nuts on how wonderful it is

Certain civic groups would do everything they could to undermine resistance making sure is stays in another part (not their part) of the borough.

A few clueless people would be showered with praise, with broomsticks shoved down the back of their coats to make them stand up straight, be placed before the cameras, and be annointed as spokespersons for the community (intoning the party line, and like trained seals, tossed the odd dead fish as a reward)

Yea I've searched all over the internet and can never find a "text book" or straight forward definition of "tweeding".

It has something to do with that Irish scumbag corrupt politician William Tweed.

I looked up "tweeding" and found a photo of Gary Ackerman!

Hey,at least they will be very close to a fine hospial,Woodhull!

Do we really need more housing? Is it really necessary to shovel in a million more residents into this city? Isn't our infrastructure already strained enough?

This residential building rampage has gone on long enough!

The only beneficiaries are the big developers who don't care about our quality of life in pursuit of big profits. Every patch of ground must have a large apartment/condo complex shooting up out of it.

And this "housing shortage" crap that's used as the excuse.
Just because many people want to live in a particular area does not necessarily grant them the right to live there and the rest of us be damned.

Why build housing if there are no jobs 1/2 the tweeds people that will occupy it.
Does Bloomturd really think he's going to get $$ from a federal government that's going to be bankrupt by the time it built ?
This is like building a big timebomb

Tweeding defined: over-development, unnecessary development, or development out of character with the neighborhood, facilitated by corrupt zoning changes, tax abatements, or incentives by politicians to benefit politically connected developers. In short: private gain at public expense.

Oh sure below market housing

that woman in the front is amusing

Definition of Tweeding:
From Gangs of New York

Boss Tweed: That's the building of our country right there, Mr. Cutting. Americans aborning.
Bill the Butcher: I don't see no Americans. I see trespassers, Irish harps. Do a job for a nickel what a nigger does for a dime and a white man used to get a quarter for. What have they done? Name one thing they've contributed.
Boss Tweed: Votes.

Boss Tweed: The appearance of law must be upheld, especially when it's being broken.

[as Monk McGinn runs for Sheriff]
Boss Tweed: That man was right born for this.
Amsterdam Vallon: He's killed 44 men, and laid low a couple hundred more.
Boss Tweed: Is that right? We should have run him for mayor.

Boss Tweed: Bill, I can't get a days work done for all the good citizens coming in here to harass me about crime in the Points. Some even go so far as to accuse Tammany of connivance in this so-called rampant criminality. What am I to do? I can't have this. Something has to be done.
Bill: What do you have in mind?
Boss Tweed: I don't know. I think maybe we should hang someone.

Boss Tweed: You're a good one for the fighting, Bill. But you can't fight forever.
Bill: I can go down doing it.
Boss Tweed: And you will!
Bill: What did you say?
Boss Tweed: I said, you're turning your back on the future.
Bill: Its not our future.

There's some honest graft involved in this as well.