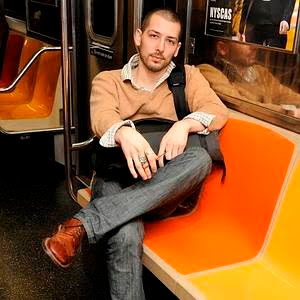 A Fashion Institute of Technology student and a waiter at a Brooklyn diner were each recently nailed by graveyard-shift transit cops, who hit them with $50 fines for taking up more than one seat on virtually empty trains at around 2:30 a.m.

Josh Stevens, of Harlem, a recent transplant from Cincinnati, was stunned when he was slapped with back-to-back summonses at the 96th Street station on Nov. 19 and 20, in what police told him was a quota-driven sting.

"After the second time, I asked the officer, 'Really, what's going on? Why is this happening?' " Stevens said. "And he told me, 'Recently we've been told to write tickets instead of give warnings for this type of thing.' He said they need to hit quotas."

Three weeks later, police were still at it when Andres Alzamora, 58, was cited for taking up more then one seat -- even though the waiter said he just had his legs in front of the space next to him.

He was stunned when police told him to step out of the 2 train at around 2:30 a.m. at the 96th Street station so he could be given the summons.

"There was no one else in the subway with me," he said. "They just want to make money."

Stevens said the police should do this kind of enforcement during the rush hour, and not in the "dead of night."
Posted by Queens Crapper at 12:30 AM

If you didn't "get it" with the first ticket,you're a dumbazz!

The bikes are not regulated - you dont need a license, helmet, ... or even obay traffic laws.

Listen, the tickets are extreme, but here's what happens on the LIRR where they don't enforce at all:

I am a partially handicapped woman and I entered an almost empty train where every seat was taken up with bags.

When I sat down on the first empty seat I saw, surrounded by 4 bags, the man whose bags were taking up the seats returned from a bathroom and started verbally abusing me.

No embarrassment to let an aging woman stand rather than properly stow his bags.

Start doing this on the LIRR!

You walk through the subway and step on piss, shit, vomit, and mucus from people with God-knows-how many diseases, and then you plant those feet on a seat where some unsuspecting person will sit on properly later on. Wouldn't you just love to be the one sitting on this seat after this jackass? Yeah, that sounds like a minor issue to me.

Neither of them had their feet on the seats.

Anyone remember a few years back when a pregnant women was sitting on the steps of the subway and was given a ticket?

The NYPD is probably the most incompetent and out of touch with reality police force in the NATION.

Don't forget the Brownies! I recently received a parking ticket for "Feeding the Meter!!!"

How does my money differ from that of another driver? Where exactly is the offense?

This happened on Queens Blvd., on the service road next to the central lanes divider.

Another Brownie later informed me that tickets of that sort are unusual but given out to meet quotas.

So I guess my fine contributed to someone's Xmas bonus? Queens sucks!

The bikes are not regulated - you dont need a license, helmet, ... or even obay traffic laws.

Wouldn't you just love to be the one sitting on this seat after this jackass? Yeah, that sounds like a minor issue to me.

Don't you trolls realize that you are way off topic or incorrect in your assumption? If this is typical of the reading comprehension level of some of the posters, heaven help us!

transit cops, traffic cops aren't paid to think. they are paid to issue fines to pay for their own salaries and other useless govt. I would have called 911 on claims of corruption.

NYPD Traffic Police should be proud of its affirmative action hiring policy. The black women are trained better than robots; if they were to exercise any thought they would lose their jobs.

According to the rules:

Section 1050.7 (Disorderly Conduct)
No person on or in any facility or conveyance shall:

This is generally interpreted by the court that you are never permitted to put your feet on the the seat, but you are permitted to put your bags on a seat on an otherwise empty train. Paragraph 1 was modified a few years (it was previously "never" permitted to occupy more than one seat), in response to a similar ticket writing campaign. It is highly likely that the officers involved were not aware, or did not care to be aware of the current rules.

Again,the hardworking taxpayers of this once great city are being assaulted by the almighty Bloombucks.

This is Harassment of the American taxpayer. The cops don't care about anything but their ticket quota. Funny that they don't ticket the illegals. They have free reign to break the law on a daily basis. Cops don't bother them, but they go after someone on the subway who worked a full day and paid their taxes, which pay the cop's salaries. Disgusting!

Blame Kelly,he is the midget at the top.

How about the sanitation dept issuing dirty sidewalk summonses on a day when the winds are 50 miles per hour?

He's taking up more than one seat in the picture. He's probably one of those guys whose "package" is so large he has to spread his legs at a near 180 degree angle.

And if the car is empty, why should we care how wide he spreads his legs?

the cops won't take police reports for real crimes though.