Another defeat for Bloomberg 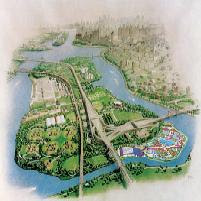 The Bloomberg administration’s attempt to revive a deal to allow 20 private schools to pay for exclusive use of public athletic fields on Randalls Island has been rejected by a State Supreme Court justice, who characterized the city’s position as “audacious.”

A coalition of public school parents and students, community groups and park advocates had sued the city, arguing that allowing the private schools, which include Buckley, Chapin and Dalton, to pay $45 million to use some of the fields would essentially turn public parkland into a private domain.

In the decision, released on Tuesday, the justice, Marilyn Shafer, rejected a revised deal between the city and the private schools, saying the city sought to “flout and undermine the purpose” of the land use review process and avoid the required community input.

The judge excoriated the Bloomberg administration, saying its arguments demonstrated “more daring than logic.” In an unusual step, she ordered the city to pay the plaintiffs’ legal fees and costs.

It was the second time in two years that the courts have rejected the city’s arrangement, and both rulings used particularly critical language.

“It’s a major win,” said Norman Siegel, who, along with New York Lawyers for the Public Interest and the firm Stroock & Stroock & Lavan, represented the plan’s opponents. “The city shouldn’t give a priority to people merely because they can pay for the use of public land. That discriminates against those who can’t pay to use the public land.”

City officials disagreed sharply with the decision and said they were “considering all legal options.”

If Bloomberg doesn't like the outcome of the lawsuit, then he should appeal with his own money, not the taxpayers.
Posted by Queens Crapper at 12:10 AM

Bloomberg doesn't care about the masses. He was trying to grab those fields for his pals. Too late for "NO THIRD TERM" BUT THE PEOPLE HAVE SPOKEN! He squeaked out the vote to win but his days of power are gone.

Say, whatever happened to Bloomy's plan to put a water park on Randall's Island?

Hey these exclusive private schools charge 30-40K from kindergarten to K12 - all hedge fund or silver spoon babies. In fact they are so exclusive is that despite the big $$ barrier, most whom apply for entrance are refused - there is simply no room as they keep class sizes to 4-6 students.

So if this is the case, the schools can well afford, buy or charge for private field sport use anywhere else they wish. Let them eat and obtain their own private green instead of the public's green! Or they can wait on line for permits like everyone else does.