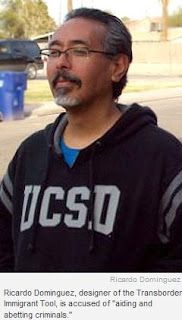 Ricardo Dominguez describes himself an "artivist" -- a cross between an artist and activist -- and he calls his newest act of civil disobedience a "Transborder Immigrant Tool."

It's a cheap Motorola cell phone retrofitted with GPS technology. Dominguez, an associate professor of new media arts at the University of California, San Diego, hopes to get the tool into the hands of people making the treacherous crossing of the U.S.-Mexico border on the so-called Devil's Highway.

The tool, which will cost less than $30 per unit, is undergoing field testing and tweaking. Dominguez has so far collected $15,000 in grants to fund its development and rollout, and by next summer, his plan is to have churches and groups like Border Angels and No Mas Muertes distribute the phones and train users on their features.

The information in the phone will be good for only four days, and instead of a traditional triangulated GPS technology, they will use a "single-bounce" system. They will be encrypted to avoid detection by the Border Patrol and other authorities.
Posted by Queens Crapper at 12:43 AM

He's no Eienstien or "Professor" more like a scammer tring to grab some quick cash and run.

If He simply wants cheap cellphones to hack. You just need to make some modifications to turn on the GPS receiver without turning on the cellular transeiver....(since cellphones still transmit signals without a SIM)
Typical Criminal !....

--- Stick them in the ground with 52mm piece of thin wire (antenna) sticking up. At these frequencys antennas are small

"The will be a "single-bounce" system. They will be encrypted to avoid detection and run for 4 days"

LOL
Translation = The hacked phones will only receive (inbound GPS signals only)and have there CMOS battery snipped so they loose anything stored when the main batterys go dead.

If this keeps up we'll be mining the border.

I hope this stupid man is stopped.
Why people want to give money to garbage like this is unthinkable.

If he is so smart, why doesn't he go to Mexico and try to fix the problems there???

Treat the illness, not the symptoms.

Aiding and abeting to commit a crime. This guy is probably illegal himself?

Round him up and lock him up. If he's working, take his salary from him to help pay for all the illegals he brought here.

Accessory before the fact

I'm a retired Border Patrol agent that worked that area, El Camino Del Diablo (the devils road) for many yrs.
This idiot is giving people false hope because no matter what kind of phone you have, if you're bringing anything less than 6 gallons of water on your back, you are going to die, period. That phone better be able to dial 911 and if they do have GPS, all the better if it turns into a rescue attempt.
I picked up young and old dead bodies. In 2000, 14 people died together, the desert is no place to experiment with your life.
Somebody needs to drop that so called professor off at the border and have him cross 40 miles of desert in 115 degree weather with his newly designed phone and see how secure he feels knowing nobody will be be able to find him. I would pay for his airfair just to watch him, say, around August 1st, nice and warm that time of the yr.

Why bother? Obama, Pelosi, and Reid are going to have total amnesty and open borders in a few months.

Send the "prof" to Gitmo!

He could be aiding and abetting terrorists!