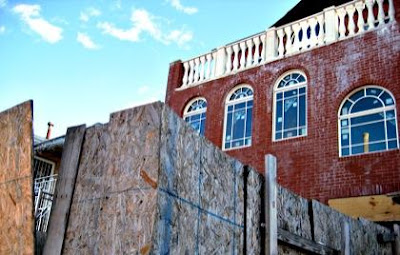 An individual involved in the construction of a Forest Hills home that has been fined nearly $200,000 for disregarding a number of stop-work orders has been accused of falsely certifying that he inspected a Brooklyn building where a city firefighter was injured after balconies collapsed, city officials said.

Vasilios Kourkoumelis, 34, of Astoria, was charged last week in a Brooklyn court with two felony counts of offering a false instrument for filing, according to city Department of Investigation Commissioner Rose Gill Hearn.

“A professional who falsely certifies that a construction project follows the building code without even inspecting the job potentially puts the public at risk,” Gill Hearn said.

Kourkoumelis applied last year to enlarge the one-family attached town house at 110-46 63rd Road, which the city has slapped with $198,500 for, among other things, ignoring stop-work orders. Kourkoumelis himself has not been fined. But the home’s owner, Vadim Sezaynayev, and the owner of the construction company doing the renovations, Aleksey Shimonov, have been fined, according to city Department of Buildings documents.

Most recently, the DOB issued a stop-work order Nov. 19 that neighbors said has repeatedly been ignored.

Kourkoumelis did not return phone calls for comment. He faces up to four years in prison if found guilty on the felony counts, Gill Hearn said.

There are currently nine open DOB violations and 11 open city Environmental Control Board violations for the Forest Hills home.

The construction caused the DOB to issue a vacate order for the next-door neighbor’s backyard. DOB officials said no one could enter the backyard because conditions could be “perilous to life.”

Hey, I know that house! That's the thorn in Matches Malone's side.
Posted by Queens Crapper at 12:10 AM

He cant afford real wood. Not after those fines...hmm plastic columns on roof I see a nice lawsuit here. Plop!

Melinda Katz is tied to this--- for sure.

This is a good start - but what about the DOB person who signed off on this aspect of the job or is this another example of a practice that should stop: Structual Engineer and architect self-certification?

Investigations of of self-certified jobs going back to the start should be conducted. There maybe many more instantences of the same to occur in the future. Is that firefighter not worth doing this investagation to save the lives of others and the public in the future?

I can hear Kourkoumelis now.

"I don't understand. This shit happens in Astoria all the time."

If every 'Archie Bunker type' on this blog wrote a letter to the Mayor to end Self Certification of DOB jobs, the program would end tomorrow. It is was wasteful of tax dollars, keeping one staff of DOB examiners for self cert jobs and one for the full review process.

Building on Your Head Party said...

We nominate Vasilios Kourkoumelis as Architect of the year for most embodying the principals for which we stand.

Last time ,the owner was listed as Fezamayev, now it says Sezaynayev. Does changing your last name's spelling make the violations go away?

No, what makes the building violations go away is a bag full of cash, AKA Benjamin Blindfolds.

This is a patented method of Tammeny Hall brought to you by 400 years of New York City corruption.