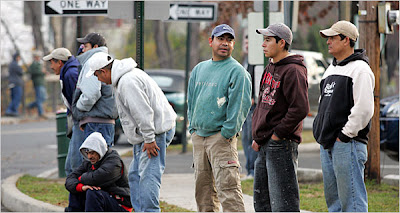 Beginning next month, day laborers will be eligible for job training and social service programs in three Queens neighborhoods under a new $1.2 million initiative paid for with federal stimulus dollars.

But advocates say they won't be satisfied with anything less than full-fledged immigration centers.

"The city is doing a great job trying to create these kinds of services for our community," said Ligia Guallpa of the Latin American Workers Project, a Jackson Heights-based nonprofit. But, she added, "the city needs to consider creating real, sustainable job centers."

The new services will be available for low-wage immigrants in Jackson Heights, Woodside and Flushing starting on Jan. 4. The city Department of Youth and Community Development also will launch two similar programs in Brooklyn and one on Staten Island.

But Guallpa said she would rather see the city invest in permanent job centers that can educate and train workers and advocate on behalf of them. She is worried about what will happen to the initiative when the stimulus money runs out in September.

Day laborers routinely contend with intimidation from local residents, merchants and police, she said. And with the poor economy, there's less work for the immigrants, who often get stiffed on their pay, she added.

The lunatics are now officially running the asylum, folks. With unemployment for Americans being what it is, this misuse of federal stimulus money is simply astounding.

Photo from the NY Times
Posted by Queens Crapper at 1:24 AM

Obama will be giving them cars to(to kill us with) & Medicaid next.
Why is the Daily News and city calling these fence jumping criminals immigrants ?
How about fixing the streets in Woodside & Maspeth you need the Lunar Rover to drive on them

People need to start taking action and do something.
Canceling the Daily News would be a good start.

Supporting people like Mort Zuckerman, The Dolan mob is like supporting Bloomberg.
PS: I canned Newsday and Cablevision.

Why not just tax the US Citizens and then set up the various tax-money doling agencies in the countries where these illegal aliens originate?

US Citizens can then stand on street corners waiting for greasy spoon operators to pick them up for a job that day.

Any US Citizen who protests these changes can be jailed as traitors.

Absolutely. I want my tax dollars to fund competition to drive down by wages and make my already difficult living situation worse by bringing in thousands of illegal immigrants to live 10 to a room at a million dollar a month rents.

Already, when I register with Temp agencies they want to know if I am on welfare and if so, they will take me first and to hell with the working class people not yet reduced to utter destitution.

This is because the government pays businesses money to employ welfare people.

Again, they will destroy my wages and use my money to do it.

I told all of you about this

Ohbamaz stimulus is NOT for white people

Why cant i get a grant to get advanced computer training?

Not li New Yoork. We looove des place. Thank you Hones Joe and Carolyn. You treet our peeople good.

Sort of explains why the local civics and cultural groups get shit - a few thousand in pocket change - while millions OF OUR TAXES go to tweeding.

We need to stand up. They have kept us groveling too long.

Hilarious. Fear of the police....


If 30 day laborers/illegals sit on a corner (northern and parsons) stealing jobs the cops NEVER do anything to/about them.

I've seen a pair of black kid waiting for their friend at the deli and they were pulled over and unjustly questioned for simply standing there. I over heard the cops (109th) say they were loitering.

Immigrants have IMMUNITY when it comes to the police but citizens are constantly harrassed by those scumbag cops.

Full-fledged illegal immigration detention centers with jobs for citizen jailers to guard them until they are deported would be significantly much better use of citizen taxes, if stimulus money is to be used, if at all, agree amigos?

This is the result of the illegal alien invasion.

the stimulus money should be used for Americans.

deport these bastards and their entire jack pot babies.

stop giving them our tax dollars.

I agree - create local agencies that round up all illegals and then proccesses them, and transports them back to their homelands. That would create a ton of jobs/and stimulate the economy. Each town could have their own agency - then process them to the boro which would hand then over directly to the state and then to the federal gov. Build large holding buildings - that would stimulate the construction industry. The Maspeth industrial area would be a great place to build a holding facility for these criminals.

One of my girlfriends works for Career Blazers - I couldnt get the loan either - She said if you want to get the $16,000.00 course for free - all you have to do is get hooked on crack - enroll in a governement sponsored rehab and they will pay for the course.
I WOULD RATHER STARVE.