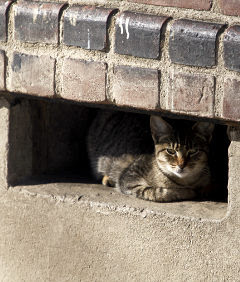 Hundreds of stray cats have settled into similar crawl spaces at Ravenswood, a 31-building complex on the Astoria-Long Island City border. The New York City Housing Authority wants them out, and had started to seal up the crawl spaces a few weeks ago before Romano and others intervened.

The latest plan - to trap the felines and bring them to city shelters - has riled up the long-time animal rescuer.

[Debi] Romano, who runs the SaveKitty Foundation, said her group is close to securing a grant that would help fund a trap, neuter and release plan. Romano and her helpers would trap the cats, adopt out the friendly ones, take the kittens and then release a small number of feral cats after they are spayed or neutered.

But NYCHA officials have rejected that proposal, Romano said.

In a statement to the Daily News, NYCHA said it consulted with the city Health Department to address its stray cat problem.

"NYCHA staff was instructed to post signs in and around the buildings to inform residents not to feed the cats," agency officials said in a statement.

Staffers were also told to purchase cat cages and "remove cats from the crawl spaces with cages and seal open vents."

Romano said NYCHA has purchased small cages that are more appropriate for squirrels than cats. And she worries that some cats, hiding in the crawl spaces, will be sealed in alive.

Romano said she has trapped almost two dozen cats in the area on her own in recent weeks.

She said a trap-and-release plan is the only way to cut down on the population.

Well that's the city for you. Long-term solutions are not something they want to deal with. They'd rather do something short-term that kills animals. Just like they did with the geese.
Posted by Queens Crapper at 12:42 AM

Not to condone animal cruelty, but are the cats more dangerous or the rats that they are keeping out of the buildings?

Right now, I have a vicious mouse problem because the landlord tore upon my floors while renovating the building for other tenants and I am hoping rats don't join them.

The cats are keeping the rats out of the buildings. It's a natural form of pest control.

Y'ever been to Rome? Cats are crawling. crawling, all over the ancient ruins.

This city is a 3rd country with no compassion for other species. Bloomberg/Quinn are such sick nasty people.

I wonder what the rabies risk is from these cats. Personally, I like the idea of neutering them and then turning them lose, but only if the risk from rabies is taken into consideration.

Ive helped get some cats and five kittens off the street from Vernon and Broadway about a year and half ago. It is still sad to see the amount of cats on the street in this city. There literally is no room for them in the ASPCA and other shelters here 99 percent of the time.
Not a sign of a healthy city.

Its very sad how many years going back that cats have been dumped on the street in Queens and Brooklyn. Not all are from the Bakeries thats for sure.

There is a bad cat abandonment problem in Miami Beach too where some beautiful animals are so new to the streets that they are still glossy and tame.

This is what happens when people are driven onto the streets. The animals are the least of their problems when they can't protect their children.

With the TNR program, the cats would also be vaccinated for rabies at the same time they're spayed/neutered.

No one has mentioned that cats kill thousands of wildlife every year...songbirds, etc. that are already in peril. They also transmit a disease that can sicken a human fetus. They are also a rabies carrier and they can fight with raccoons in Queens!The trap and release people give them ONE rabies shot..well how about the follow up shots that my dogs get every 3 years?? Who can trap them again?? I had a terrible cat incident in my own fenced backyard. A young cat entered my yard while I was out with my dogs and they attacked it. I was horrified! I finally got the severely injured cat away and had to pay $150 to euthanize the poor thing.I am also a cardiac patient and I did not need to have such a horror in my own yard. I think NO Cats should be allowed outside..at all!! It is cruel and dangerous. They get into fights, get run over, get ill, starve and suffer. People should be fined for allowing cats outside. May be hard to enforce but allowing strays on the streets is totally irresponsible. Think of dogs running the streets wild?? Perhaps some wealthy people can start enclosed feral cat colonies on their estates. I also pay a license fee for all of my rescued, adopted dogs. Cat owners should also fork up $$ to help pay for all the stray cats in the city that overwhelm the shelters.