Call for architects on community boards 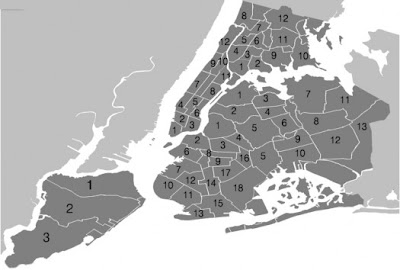 Across the five boroughs, there are a total of 59 community boards, each with 50 members who are appointed for staggered two year terms. In 2010, half of the 2950 seats are open for new appointments. According to Mr. Khan and Margery Perlmutter, legislative director of the AIA New York Chapter, architects are sorely needed to fill some of those seats. When major projects such as the East River Waterfront Esplanade, or the construction of new buildings in historic districts are undertaken, the land use committees of community boards are consulted and often relied upon heavily for community input. Architects can play a very important role on these committees when forming recommendations for projects that are sometimes controversial and would affect the daily lives of many people. According to Ms. Perlmutter, the need for architects’ expertise and judgment in issues of zoning, landmarks, and design is needed throughout the city, but is even greater in the outer Boroughs.

Based on that statement, I decided to look up my community board, and find out the range of professional expertise among its members. When I spoke to Robert Perris, district manager of Brooklyn Community Board 2, he told me that there were no architects on the board. Not only that, there were no landscape architects, no engineers, and no artists or designers. In a district with double the citywide percentage of professionals and a large artist community, I found this surprising. It certainly speaks to the need for recruiting members of the design professions. The only qualifications to be eligible for a community board seat are residence in New York City, a “significant interest” in the community board to which the application is made (defined simply as living or working in the district), and some record of community involvement or engagement.

Yes, we all know how important it is to have members of the real estate profession on the community board. And we all know how architects love to become involved and engaged in the communities in which they work. It's also interesting how there are no architects on the referenced Manhattan CB yet I can think of at least 2 notorious architects that have found their way onto Queens community boards. Wonder how that happened.
Posted by Queens Crapper at 1:28 AM

All of the boards can hire Architects on a retainer bases to provide consultancy, comments, advice etc but not be part of or participate as a board member themselfs. Architects on a board situation would have too many conflicts of interest and cannot be effective to the public and other board members.

Community Boards do not have money for any consulting or expertise, unfortunately.

There actually would not be conflict of interest--we have had architects in past. Sounds like maybe you just don't want to do volunteer work.

Well I, like most architects, work. a lot. 50-60hr weeks (being paid for 40) are not uncommon, even in these economic times. Hell, my office is open tomorrow (x-mas eve).


Unfortunately, since we are not 60-80yr olds living off of SS, Medicaid, and pensions, many of us are not able to attend a 4pm Thursday meeting at the elks lodge.

I would actually LOVE to join my CB. Lots of real crap being put up in my area, and I WOULD LOVE TO KICK THE GUY IN THE NUTS who approved a 3-fam rental in my R4-1 neighborhood., but its just not feasible.

and I WOULD LOVE TO KICK THE GUY IN THE NUTS who approved a 3-fam rental in my R4-1 neighborhood., but its just not feasible.


yea, who wouldn't but you gotta remember that the community boards are safe appointees from people dependent upon the real estate industry for honest graft.

in short, you would never get on.

Professional expertese to do what - build more?

How about mom and pop store expertise?

How about parents of kids in inadequate schools expertise?

How about owner occupied housing expertise?

You get the picture.

This idea has been floating around for quite some time. Take a look around you on how well this is going.

What we need are people with community preservation expertise.

It sounds like the naysayer has never been to a community board meeting. In fact, hard-working and very busy people of all types, from all disciplines sit on community boards. On my board there are busy working bankers, lawyers, school teachers, hospital and university administrators, secretaries, property owners, housing specialists and at least one architect (but there should be two!) Architects and designers are needed because so many of the issues that community boards consider involve land use matters. Design professionals bring vision and expertise to the debate and help the community board arrive at more intelligent, well-reasoned conclusions. Boards do not hire architects as consultants except in very rare cases when they are proposing their own rezoning actions. Boards rely on their members' expertise to make decisions. Membership on a board is a commitment of time and civic pride. Members learn enormous amounts about their neighborhood and the political process. Some members even go on into politics and run for city council positions. ANYONE can become a member if you demonstrate to your City Councilmember and your Borough President that you have something valuable to contribute to the community board. Rather than saying no without knowing, find out about it and apply. If you care about what is going on in your neighborhood, prove it. Act.
The AIA New York Chapter can help you figure it out.
Margery Perlmutter, AIANY Chapter, Legislative Director.

Reminder! Time is running out to apply to become a member of your local Community Board!

Architects and Design Professionals are urgently needed to participate in the political processes that affect land use and planning in New York City.

Find out what Community Board you live or work in and submit your application today to the Borough President's office of your borough.

Contact your City Councilmember to let them know that you want to join your Community Board.

The AIA is here as a resource to help you become involved in public policy issues that will improve the City and support the AIA community. Visit the advocacy page for more information, or contact enemens@aiany.org.

Below are links to the relevant websites. Apply today. Join! Participate in the Process!

Myth
It sounds like the naysayer has never been to a community board meeting.

REALITY
AH YES HE HAS. "DO NOT NOTICE THE MAN BEHIND THE CURTAIN IS THE MOTTO OF OUR BOARD" BTW

Myth
In fact, hard-working and very busy people of all types, from all disciplines sit on community boards. On my board there are busy working bankers, lawyers, school teachers, hospital and university administrators, secretaries, property owners, housing specialists and at least one architect (but there should be two!)

REALITY
AH-HUH. UMMM....ANY COMMUNITY PRESEVATION ACTIVISTS, MOM AND POP STORE OWNERS, REGULAR JOES THAT PAY THE TAXES AND SEE IT GET WASTED ON ALL THOSE HARD WORKING DEVELOPERS WHO NEED TO PAY ALIMONIES TO THREE WIVES

INSTEAD OF THE CITY WASTING TAXES ON ARCHIE BUNKER'S TRASH COLLECTION OR EDITH BUNKER'S KIDS IN SCHOOL.

Contact your City Councilmember to let them know that you want to join your Community Board.
---

Everyone on our community board is either connected, or keeps their mouth shut.


ya gotta love crappie for telling them where it is. this place is great!

ANYONE can become a member if you demonstrate to your City Councilmember and your Borough President that you have something valuable to contribute to the community board.

We'd like to thank you for your $upport. Keep that "target" money coming. It's going to be a very very merry Christmas this year. Thank you Claire and friends. Wink Wink