NY will get screwed by health care bill 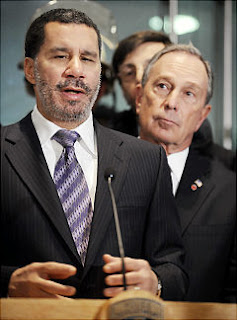 Gov. Paterson, Mayor Bloomberg and other officials warned the Senate plan would:

- Blow a $1 billion hole in the state's budget.

"It is really a disgrace and we've got to make sure that we fight before the bill is finally passed," Bloomberg fumed.

New York ended up on the short end as Senate brokers showered cash on states whose senators were among the last holdouts before Democratic leaders locked up the 60 needed votes.

A health care overhaul passed by the House last month is more generous to the city and state, and negotiations over the differences start in January.

Under the Senate plan, the biggest rewards go the states that, unlike New York, have been Scrooges to the poor in need of medical care.

"We are in a sense being punished for our own charity," Paterson said Monday.

Um....Chuck? What do you have to say about this?

- The Senate health care bill would cost New York between $1.1 billion and $1.25 billion a year, according to Gov. Paterson's office.

- The House bill would save the state about $4 billion a year.

- New York State, which covers half its Medicaid costs now, will keep covering half under the Senate bill.

- New York City would lose funding for about 100 community health clinics and would have to close them, Mayor Bloomberg says.

- The House plan would cut $2.6 billion over 10 years from reimbursements to New York hospitals for treating people who cannot pay their bills.

- The Senate bill cuts $5.5 billion, according to the Health Care Association of New York.
Posted by Queens Crapper at 1:04 AM

Of course we are going to be screwed. With Sen. Shumer and Sen Kirsten on board watching out for our backs, we are sure to come away with broken backs! Gov. Patterson would not know or care what's coming, he won't be around anyhow when it does.

The whole country is getting screwed. I don't understand why there isn't more of an uprour about this horrible, expensive, going to hit you big time in the pocket, health care bill. People should be very upset and writing to their politicians today.

President Obama wants and needs this so watch out America.

Agree with the second poster. With or without intervention by NY, we are all going to be screw if this passes. Obama-care will bankrupt the country and mess up the few things that work in health care. No one I speak to is in favor of this. Why is this being rammed down Americans throats?

"Why is this being rammed down Americans [sic] throats?"

The Pragmatists declared that philosophy must be "practical" and that practicality consists of dispensing with all absolute principles and standards - that there is no such thing as objective reality or permanent truth - that "truth is that which works". and its validity can be judged only by its consequences - that no facts can be known with certainty in advance, and anything may be tried by rule-of-thumb - that reality is not firm, but fluid and "indeterminate", that there is no such distinction between an external world and a consciousness (between the perceived and the perceiver), that there is only an undifferentiated package-deal labeled "experience", and whatever one wishes to be true, is true, whatever one wishes to exist, does exist, provided it works or makes one feel better. - Ayn Rand, For the New Intellectual

Start hiding your wallets, this guy way of re-distrubute the wealth in the next 3 years.
There are 30-60 million good for nothing and sec 8s jumping for joy right now

i called crowleys office and stated that i am against this bill that it would destroy the working class people , the next week i received a letter from his office explaining how hard he is working to get this bill passed , how is that that you call your rep to tell him you dont want his and they send a f*** you letter telling he does not care what i think he is voting for it no matter what the people in his district say.

Why is everyone so surprised? New York always gets screwed. Look at the politicians who represent us. You get the government you deserve. Someday, New Yorkers are going to smarten up and play hardball and flush the toilet on all the incumbents. Until then, we are screwed.

I don't understand why this subject of healthcare can't be put to a vote. The American people are the ones who are going to pay for this for many generations. Why can't we have a special election to determine if this is what the people want? The politicians would be off the hook either way.

Why bitch and complain? We have the best elected officials money can buy!

Single payer is the only answer.

Until politicians stop taking billions from pharmaceutical and insurance companies, we'll only have "reforms" that benefit this cartel's bottom line. It's sad to hear posters here calling the Senate bill "socialism," when it's in fact nothing more than corporate welfare. Why should anyone be able to profit off of human suffering?

"I don't understand why this subject of healthcare can't be put to a vote."

We live in a representational democracy. 220 years ago it was decided that we would elect people to make decisions for us. If you want to vote on things directly, change the Constitution or move to Switzerland.

the way this country is going Switzerland looks good

I sincerly believe that a constitutional convention is long overdue. There are a number of issues to be brough to the table

anyone else care to add?

"We live in a representational democracy. 220 years ago it was decided that we would elect people to make decisions for us."


Unfortunately, that doesn't work when the elected officials are corrupt and self-serving.

i have medicare coverage which pays for 80%,and B/C
B/S pays for 20% of my doctor and hospital bills.i have had this for 10 years.i made contributions from every paycheck ,during my employment years into social security, from which my medicare is now paid.
by living a frugal life ,i can afford to pay the B/C B/S
premium.i do not need socialism and government to control my health choices.
when i called N.Y.,U.S.Senator Chuck Schumer's office to request he vote against the Senate health care bill,
and detailed why i was not for it,i asked the clerk to read back my statement. when she could not ,i told her she was incompetent and should be fired for only letting me vent.is this the representative government ,for the people,by the people that we are supposed to be granted by our Constitution ?
who are these elite frauds that we have stupidly allowed to dictate their control over us. they are our servants.let them hear now that they will be gone ,after the next election.

Wow. You don't need "socialism and government" to control your health insurance because you have MEDICARE. What do you think medicare is? It is the very definition of SOCIALISM and GOVERNMENT INTERVENTION. Your ignorance is quite saddening.

Medicare: Another liberal socialistic system. It was supposed to help people in the last few years of their lives; now it sustains people for 30 years. Time to eliminate it.