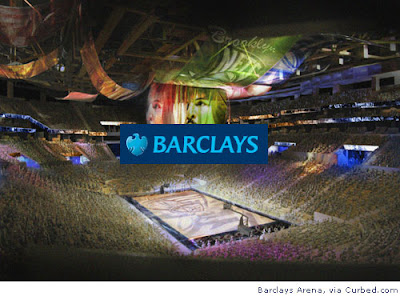 Years after a wave of construction brought publicly financed stadiums costing billions of dollars to cities across the country, taxpayers are once again being asked to reach into their pockets.

From New Jersey to Ohio to Arizona, the stadiums were sold as a key to redevelopment and as the only way to retain sports franchises. But the deals that were used to persuade taxpayers to finance their construction have in many cases backfired, the result of overly optimistic revenue assumptions and the recession.

You mean like Yankee Stadium and Citifield and the proposed Barclays arena in Brooklyn and the one that keeps popping up as a possibility in Willets Point?

Check out this analysis from Atlantic Yards Report:

Well, the sports facility financing schemes in New York are different and, to their architects, much superior: the amount of direct subsidy is much smaller, for land and/or infrastructure rather than construction, while the cost of construction is magically shifted to PILOTs (payments in lieu of taxes), given that the land is (and, in most but not all cases, was) tax-exempt. And the Internal Revenue Service has now banned such plans, after grandfathering in the one for the arena.

Of course the tax exemption for the Metropolitan Transportation Authority's Vanderbilt Yard was supposed to increase the price of the property when sold, but there was only one other bidder, given Forest City Ratner's head start. As the New York City Independent Budget Office (IBO) observed, "It is clear that the MTA’s ability to maximize its return from property sales has been constrained."

And the PILOTs in the case of the AY arena would rely significantly on the naming rights that the state simply gave away.

And Forest City Ratner has been good at getting the city, state, and MTA to modify agreements in its favor. Meanwhile, the IBO's analysis that the arena would be a net loss for the city has not been refuted, despite the Times's willingness to quote a deceptive response from the New York City Economic Development Corporation (an agency that has failed to release a promised cost-benefit analysis).
Posted by Queens Crapper at 1:48 AM

Sports and religion are both sacrosanct.

Those team owners do to our cities what the priests do to the choirboys.