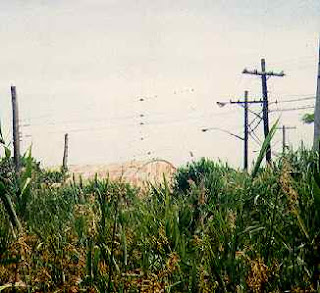 A homeless man was found beaten, left in the woods and later died in the hospital in Queens Sunday afternoon, according to New York City police. The unidentified Hispanic male was discovered at 1:12 p.m. in the woods along 20th Avenue in College Point by police responding to calls of a male who had been assaulted, according to a police spokeswoman.

Police found bruises on the man's body, although they were unsure if they were the result of the assault, according to a police spokeswoman. The man was taken to Flushing Hospital, where he was later pronounced dead. An investigation is ongoing.

I assume the "woods" is Flushing Airport.

Photo from Forgotten NY.
Posted by Queens Crapper at 8:05 PM

It is now about 1:15 a.m. and there is a police helicopter hovering over the property. The sound of the chopper as it nears the apartment complex is really annoying. I wonder what they are looking for at this time of night? I am beginning to wonder if there is more to the story than we are being told?

The man is likely to have been an illegal alien.

If so, he could have avoided this deadly assault entirely by never leaving the country where he possessed legal citizenship.

Now, his avoidable death will consume countless hours of police time and manpower (not to speak of taxpayers' money) to eventually conclude with nothing.

Dump the Commissar of Aliens on November 3.

How does a man's immigration status figure into his murder? There are plenty of American citizens who served in Vietnam who are homeless on the streets.

I hope that they find the vicious thug who killed this man before he strikes again.

And what if he isn't illegal?

Isn't it interesting that there has been almost no press coverage (save for Newsday) regarding this story? I checked local news shows as well as the Times, Post, & Daily News. It is unfortunate that the abandoned airport is now the scene of a murder investigation.

Years ago when I was invited to take the "developer's tour" of the Flushing Airport site, someone mentioned that a homeless person was living amongst the trees and actually received mail! As we walked the area, we noted that there was evidence of recently used campfires with fresh ashes in them.

What concerns me is the potential for a large fire at the old airport site during the summer when everything is dry and flammable. I gave it some further thought and realized that someone could set a fire, accidentally or intentionally, potentially destroying the trees and sensitive wetlands.

Then what? Would the city then declare the site totally usable, changing its protected status, and try to commercially develop the site? This administration is so corrupt that I would not put anything past them.

Some of the people across from the BJ's and Target complex in the trees do not consider themselves homeless but rather "campers." I don't know if the murdered man was one of them or not. If you believe what they say, they have been paid to move there from other waterfront areas in north College Point where they had been choosing to "camp" for years, had squatter's rights to the land, and were in the way of current condo developments. Some of them were once "normal" people with jobs who got into drugs and chose to camp in the waterfront woods of College Point (mostly gone now) rather than work 9-5. They seem to collect bottles for a small living. They are not making the societal choices that most everybody else makes, but is there anything wrong with that? Kind of no different than going West 150 years ago; just go live somewhere and survive. Trespassing? That airport has been nothing but weeds, floods and mosquitos for 20 years. Someone pass the Deep Woods Off!

I'm very scared and surprised learning this, and don't live very far from the 20th Avenue swamp. The fact that a man was mysteriously murdered this week there, just gives me the chills! It's very interesting to learn of this, and to read all of the comments that have been posted so far, especially the very last comment since it's thought-provoking and very open-minded and gives me a different perspective on things. I agree with them and wouldn't consider squatting, camping, etc., in the swamp, really "trespassing." It is the former site of an airport that closed in the early '80s and to my knowledge hasn't been used for anything at all since then. Let the homeless squatters and urban explorers be. They're not harming anyone.

anybody was arrested for this crime