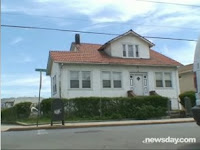 A couple accused of running a nightclub out of the basement of their Long Beach home, peddling drinks and dancing, told authorities they were merely raising funds to send their teen beauty queen daughter to a Central American pageant.

The authorities say Naraine and his wife, Julissa, broke the zoning code, caused a fire hazard and served alcohol without a permit.

City inspectors investigating a noise complaint in a residential neighborhood this month found 30 people in the Naraine home on Riverside Boulevard and 20 people outside, documents show.

"He was charging admission to get in," said Theofan, who accused the couple of running a nightclub. "There was music. There was dancing. There was a DJ."

The city charged the Naraines with zoning and building violations, for which they could be fined.

Hey guy, move the parties to Queens. Not only will the DOB not give a crap, but when neighbors call 311 to report it, the police will just mark the call as "answered" and state that they didn't see anything.
Posted by Queens Crapper at 12:28 AM

They'll also tell the partygoers to just inside the house with the other 300 people!

And when a horrible fire breaks out, and kills 237 people, you can always blame the city for not enforcing the building code!!!!

And in Queens you can have special Chinese favor girls to dance with !