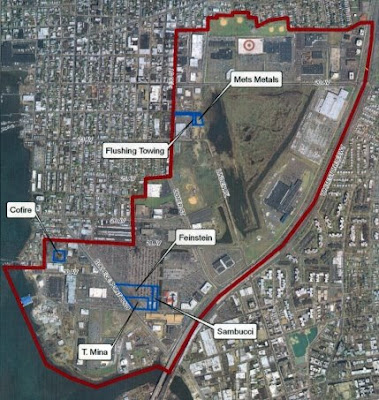 Cofire, which has been in business for some 50 years, hopes to build a new plant on its city-owned property in the College Point Corporate Park.

"We are in a great place and we want to stay here," Shapiro said.

The Cofire property is being enlarged as part of a pending rezoning of the corporate park, and Shapiro said the company has been working with the city on the possibility of the company sharing its space with a business relocated from Willets Point.

Why would Cofire have to share land with relocated Willets Point businesses when it isn't even close to any of them, according to the City's own map (pictured, courtesy of Iron Triangle Tracker)?

The City also just purchased the Grace Asphalt plant in Willets Point for continued DOT use. Combined with the highways the triangle is surrounded by, that should make for some great air quality for residents moving into the "new" Willets Point.
Posted by Queens Crapper at 12:42 AM

Why is this even being considered? At what point is enough enough?