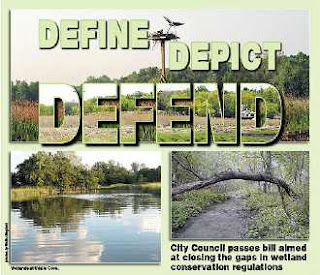 New York City used to have over 300,000 acres of wetlands; today, less than one-tenth remain, due to development projects that have taken place over the past 150 years. Various federal and state laws regulate development in wetland areas, but there are gaps in the rules, which means many of the city’s marshy areas fall through the cracks.

To try to close the regulatory loopholes, the City Council recently passed a bill requiring that the city identify and document all remaining wetlands and develop a comprehensive conservation strategy for them. The goal is to prevent further net loss of wetlands in the city.

The bill passed unanimously in the council, and the mayor is expected to sign the legislation on Tuesday.

...according to a report issued by PlaNYC, the oversight of wetlands mitigation is uneven, so the city’s standards do little to close the gaps in state and federal regulations.

The goal of the legislation by the City Council is to reverse that problem by creating a city conservation strategy, to be completed in 2012.

In addition, the City Council passed a bill requiring that public wetlands — those owned by city agencies — be inventoried. An effort is also underway to transfer most city-owned wetlands to the Parks Department for protection. Of the wetlands that have been transferred so far, 90 percent are in Queens.

Wow, that Mike Bloomberg is soooo green! So why does he want to develop the Ridgewood Reservoir and Flushing Airport, which are both wetlands?
Posted by Queens Crapper at 12:49 AM

'Taking an inventory' is not the same as 'protecting' something. Afterall, the preservationists are always taking inventory of what is out there.

And they protect shit.

All this does is put every morsel on one table.

"Wow, that Mike Bloomberg is soooo green! So why does he want to develop the Ridgewood Reservoir and Flushing Airport, which are both wetlands?"

Because his developer buddies want him to!

What park do taxpaying citizens of Maspeth use? Saint Saviour's Park?

Not on a bet! Those people have barbecues and eat hamburgers, hot dogs and drink beer.

Little people will never get a park while rich people have any say.

So, let's silence this Commissar's say on November 3. Toss him back to Boston. Or Bermuda.

If this dwarf is so green, then why is he using our tax dollars to mail out a 20 page campaign brochure on unrecycled paper under the insignia of the NYC Dept. of Environmental Protection?

Environmental Protection? Does this moron actually believe that because he has a turtle face, he's the great protector of the environment? Does he believe he's Briella the turtle?

Let's turn this tortoise on his back on November 3.